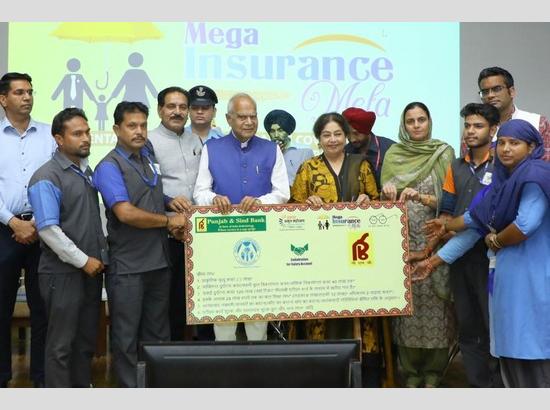 Banwarilal Purohit, Governor, Punjab and Administrator, UT, Chandigarh on Thursday launched accident & disabilities insurance cover for the Municipal Corporation employees. As per the scheme, Rs. 40 lacs will be given to families of account holders in case of accidental death or total disability.

While addressing the employees of MCC and others present during the event, the Governor said that aiming to provide such exhaustive insurance coverage to about 10500 employees working in the Municipal Corporation and their families was an excellent step. It was commendable that the insurance cover for was for all its employees, not just regular but contractual, outsourced, daily wagers, employees from group A to group D. He also congratulated the Punjab & Sind Bank for this noble initiative, which has offered such huge benefit to all MCC employees.

He said that it is our responsibility to protect and safeguard the interests of workers in general and especially those who constitute poor, deprived and disadvantage sections of the society. He said that this initiative shall go a long way towards creating a healthy work environment and higher productivity.

Kirron Kher, Member Parliament, Chandigarh said that this will give a huge relief to employees and their families. Earlier, in case of any accidental death of outsource employees, the MCC, being the principal employer was bound to give relief to the family of deceased employee out of its own funds, which was a big burden on the exchequer of the Corporation. Now the bank has given this mega insurance cover to the employees of MCC, which is indeed a joyous news to all.

Sarbjit Kaur, Mayor , in her address, said that, that the MCC has started this scheme for all its 10500 employees working in different wings of MC including 925 door to door waste collectors, 543 daily wagers, 76 contract basis and 5272 on the outsourced staff, 1100 employees of Lions firm which is looking after the sanitation work of sectors from 31 to 62.

She said that presently, only group D employees were insured under the Pradhan Mantri Suraksha Bima Yojna (PMSBY) and Pradhan Mantri Jeewan Jyoti Bima Yojna (PMJJBY). The premium for these insurances is being paid by the MC @ Rs. 12/- and Rs. 330/- per annum per employee. The insurance cover upto Rs. 2 lacs only is payble under each scheme in case of natural/accidental death. But now the Punjab & Sind Bank has provided mega accidental/disabilities insurance cover of Rs. 40 lacs.

Dharam Pal, IAS, Adviser to the Administrator said that this initiative of Municipal Corporation towards the welfare of its employees is probably the first of its kind in the entire country. He said it will not only cover the accidental or disabilities insurance but shall also provide various other services including education and care of children of the deceased employees.

She further said that in case of partial disability, the insurance cover will be given as per the percentage of the disability as mentioned in the schedule; Air accidental Rs. 1.20 crores; child education benefit from 12 years to 22 years upto two girls child Rs. 24 lacs (Rs. 12 lacs each), one girl and one boy, Rs. 12 lacs plus Rs. 6 lacs, two boys Rs. 12 lacs (6 lacs each) and in case of natural death Rs. 2.50 lacs will be given.