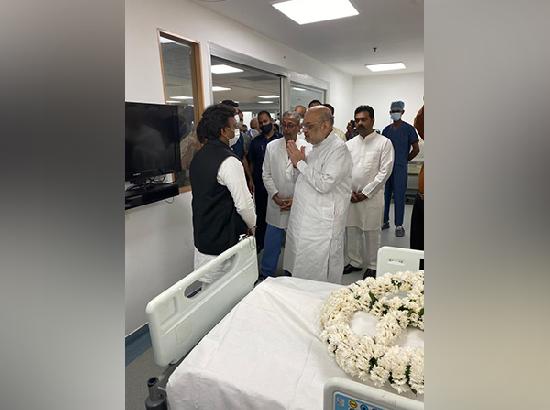 Union Home Minister Amit Shah was one of the first politicians to reach Medanta Hospital in Haryana’s Gurugram where Samajwadi Party supremo Mulayam Singh Yadav passed away on Monday.

“Mulayam Singh Yadav ji remained active in politics for decades with his unique political skills. During the Emergency, he raised his voice for the restoration of democracy. He will always be remembered as a grassroots leader. His death marks the end of an era in Indian politics,” Shah tweeted in Hindi.

Singh will go to Saifai in UP’s Etawah to attend the last rites of former UP CM Tuesday.

Saifai is the birthplace of Mulayam Singh, who was born on November 22, 1939.

The veteran Samajwadi Party leader passed away while undergoing treatment at the Medanta Hospital at 8:16 am.Mulayam’s condition had been “quite critical” for the past few weeks and the Samajwadi Party patriarch was on life-saving drugs.

Prime Minister Narendra Modi condoled the demise of the 82-year-old leader and recollected his relationship with the veteran leader from the other side of the political spectrum.

“Shri Mulayam Singh Yadav Ji was a remarkable personality. He was widely admired as a humble and grounded leader who was sensitive to people’s problems. He served people diligently and devoted his life towards popularising the ideals of Loknayak JP and Dr Lohia,” PM Modi wrote on Twitter.

President Droupadi Murmu also expressed grief on the demise of the Samajwadi Party patriarch and said that his death is an “irreparable loss” to the country.

“The death of Shri Mulayam Singh Yadav is an irreparable loss to the country. The achievements of Mulayam Singh Yadav ji, who came from an ordinary environment, were extraordinary. ‘Dharti Putra’ Mulayam ji was a down-to-earth veteran leader. He was respected by people of all parties. My deepest condolences to his family members and supporters!” the Rashtrapati Bhavan tweeted.

Mulayam Singh served as the Chief Minister of Uttar Pradesh thrice and has also served in the Union Government as the Minister of Defence.

He was elected 10 times as MLA and seven times as Lok Sabha MP.