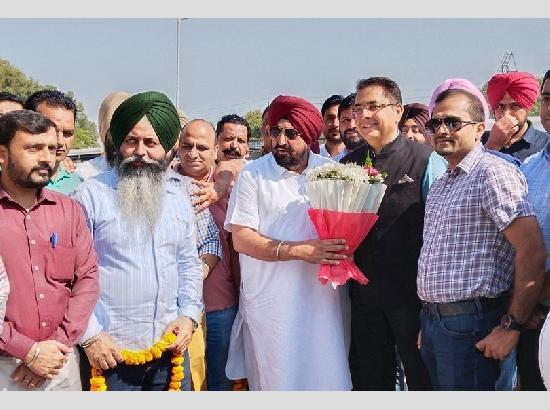 Punjab Government led by Chief Minister Bhagwant Mann is striving hard to promote the industry in the state for generating more employment opportunities for the youth of the state, said Housing & Urban Development and Information & Public Relations Minister Aman Arora, who laid a foundation stone of Udyog Seva Kendra at Dera Bassi Today.

Aman Arora, while addressing the members of the Dera Bassi Industries Association, said that the industrialists of this region will get great benefits with this Udyog Seva Kendra.

He said that Chief Minister Bhagwant Mann was pushing to promote Ease of Doing Business and establishing new industries in the state, which is the backbone of the economy as in the progress of any country or state, industry plays a major role.

He said that he has been hearing about the difficulties faced by the Dera Bassi industrialists. The industry of this area was neglected by the previous governments. Now, the state government led by Bhagwant Mann was not leaving any stone left unturned in providing the required facilities to the industry.

He informed that the Housing and Urban Development department has delegated powers for approval of Building Plans and grant of Completion Certificate of standalone industries including the compounding of standalone industries, outside MC Limit, to the Director of Factories so that the industrialist need not apply at two separate departments for getting the Building Plans of their factories approved.

Many other significant decisions have been made regarding setting up industries in the state, with which Punjab was emerging as a preferred destination for industries across the country.

On this occasion, he also lent a sympathetic ear to problems being faced by industrialists and assured them to resolve their problems at the earliest.