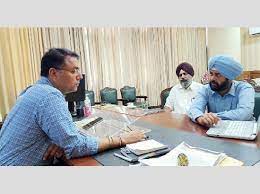 In a bid to find a sustainable solution to municipal solid waste (MSW), Punjab New and Renewable Energy Sources Minister Aman Arora emphasized the need to make optimum use of the solid waste to generate green energy and bio-fuel from it.

The Minister was holding a threadbare deliberation with representatives of a bio-fuel company and senior officials of the department.

Chairing the meeting at his office at Punjab Civil Secretariat-1 here, the Cabinet Minister said that Chief Minister Bhagwant Mann-led Punjab Government is committed to promoting non-conventional and natural energy sources as the best possible answer to the pollution problem for saving the environment.

While giving a presentation on the feasibility to generate bio-fuels and hydrogen using solid waste, Aman Arora was apprised that the urban areas of Punjab generated about 3,800 tons per day (TPD) MSW in 2021. Unsegregated MSW remains a major challenge as manual segregation is not possible for these large volumes of MSW, which eventually results in large-scale dumping of waste in landfills.

Showing keen interest to invest in Punjab, Dr. Gurjot Singh, Director BioShakti said that their company has developed a hub & spoke model, wherein unsegregated MSW in nearby urban local bodies will be segregated using an automated process, which will further be converted into an organic-rich fraction and a combustible fraction (RDF) using well-established technologies.

“The organic-rich fraction will be processed into a dry anaerobic digestion plant to produce bio-CNG and high-quality compost, while, the RDF will be shredded, baled, and transported to a central refinery where it will be gasified to produce a range of fuels including methanol, biodiesel, and sustainable aviation fuel,” he said.

He evinced that the first such plant to handle the MSW is proposed to be set up in Ludhiana, Patiala, SAS Nagar, and the nearby ULBs.

The company will make an investment of Rs.1500 crores to set up the hub and spokes in collaboration with the ULBs. The plant will create up to 500 green jobs and could handle 1600 TPD of MSW from these major urban centers of the state, he added.

Hydrogen mobility can play a pivotal role in decarbonizing sectors such as long-distance transport by trucks and buses that are difficult to electrify, he briefed.

Assuring every possible support from the government side, Aman Arora asked PEDA officials to submit a detailed concept note in this regard.