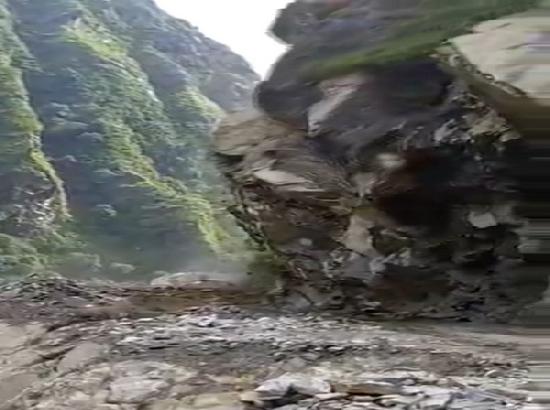 As many as 40 Kailash Mansarovar Yatra passengers including several locals got stuck at the Tawaghat Lipulekh National Highway after a large part of the hill fell on road near Uttarakhand’s Najang Tamba village.

Due to this blockade in the route of Adi Kailash Mansarovar Yatra, which goes via the Najang Tamba village has also been halted.

Adi Kailash is a popular pilgrimage for Hindu devotees. It is situated in the Indian Territory in the Pithoragarh district of Uttarakhand within proximity to the Indo-Tibetan border.

Senior scientist of the India Meteorological Department (IMD), RK Jenamani on Friday issued an orange alert for very heavy rainfall in Uttarakhand for the next two days.

On Friday, the IMD had forecasted heavy falls with lightning over Uttarakhand and its adjoining regions.

It further said that “isolated heavy rainfall” was also expected over the state from September 23 to September 25.

National Highway (NH)- 109 at Rudraprayag was blocked on Thursday, with long queues of vehicles after a sudden landslide led to the roll down of debris from the hill near Tarsali village in Rudraprayag.

The blockage of the NH led to long queues of vehicles being formed on both sides of the road.

However, no casualty was reported due to the landslide, the pilgrims going to Kedarnath were stopped at Rudraprayag, Tilwara, Agastyamuni and Guptkashi and the ones coming back from Sonprayag were also stopped at safe places at Sonprayag, Sitapur, etc.