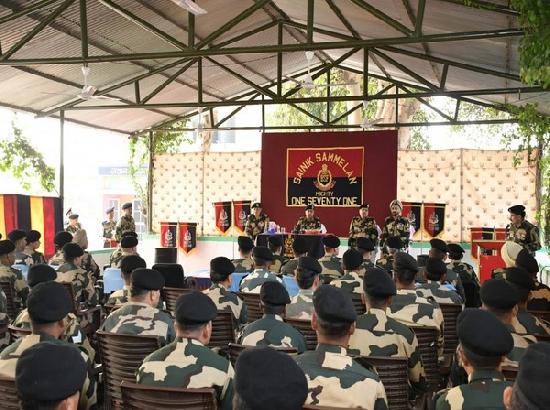 The Additional Director General (ADG) of the Border Security Force (BSF) on Wednesday visited the International Border (IB) areas of the Jammu Frontier and reviewed the security situation there, said a Press Release by the BSF.

PV Rama Sastry, IPS, Additional Director General, Western Command, BSF, is on his three days visit to the frontiers, as per the Press Release of BSF. The visit of BSF ADG, which started on the 13th of November is to conclude on the 16th of November, 2022, informed BSF.

On the concluding day of his three days visit, the ADG today visited areas of the Jammu IB at Sunderbani and Indreshwar Nagar Sector.

The ADG was accompanied by Shri D K Boora, IG Jammu and other senior officers of the Jammu frontier.

The ADG BSF was briefed on the complexities of border management, the overall deployment of BSF in th area and the domination plan of the IB area under the current security scenario.

The brief was done by the BSF Sector Sunderbani and Indreshwar Nagar DIG and Battalion commanders.

The ADG BSF PV Rama Sastry also visited the vital areas along the IB of Sunderbani and Indreshwar Nagar sectors and examined the operational preparedness of Field formations.

ADG mentioned that through their efforts, the BSF has remained successful in foiling all evil designs of Anti-National Elements (ANEs).

The troops at the Jammu Frontier also interacted with ADG with full enthusiasm and zeal.