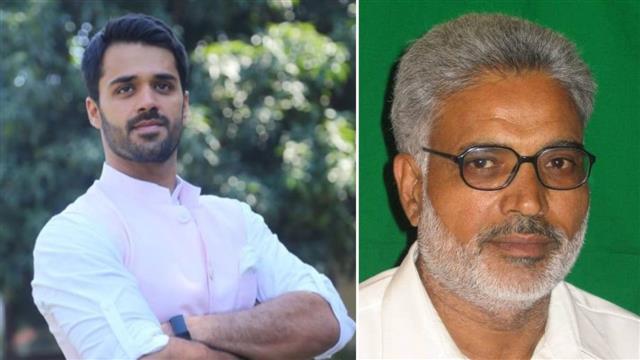 The young and suave candidate of the ruling BJP, Bhavya Bishnoi, looks to defend his “family bastion” for five decades, while the main opposition Congress has placed its bet on veteran leader Jai Prakash in the Adampur bypoll in Haryana.

The Bharatiya Janata Party (BJP), the Aam Aadmi Party (AAP) and the Indian National Lok Dal (INLD) have fielded “turncoats” for the November 3 bypoll to the Assembly seat in Hisar district. The nominees of all three parties were once in Congress, which feels that the voters will teach a lesson to “traitors” this time.

The Congress is banking on former Union Minister Jai Prakash, 67, a three-time former MP from Hisar and a two-time former MLA, to boost its fortunes in the contest.

While Bhavya Bishnoi, 29, recently quit the Congress along with his father Kuldeep Bishnoi to join the BJP, the INLD candidate is Congress rebel Kurda Ram Nambardar.

The AAP has fielded Satender Singh, who switched over from the BJP. Singh was also in the Congress before joining the saffron camp.

Bhavya Bishnoi had unsuccessfully contested the 2019 Lok Sabha polls from Hisar as the Congress candidate.

The bypoll was necessitated after Kuldeep Bishnoi, the younger son of former chief minister late Bhajan Lal, resigned as the MLA from the seat and switched sides from the Congress to the BJP. Bishnoi had defeated BJP’s Sonali Phogat from Adampur in the 2019 state Assembly polls.

Phogat’s sister Rukesh had recently said she would contemplate about contesting the Adampur bypoll to fulfil her sister’s dreams.

However, she subsequently decided not to enter the fray.

Barring the BJP, the three other major parties have fielded candidates from the majority Jat community in Adampur, a predominantly rural constituency. The BJP’s ally, Jannayak Janta Party (JJP), is supporting Bhavya Bishnoi.

Polling will be held on November 3 and the counting of votes will be taken up on November 6.

Adampur has been a bastion of the family of Bhajan Lal, who was a tall non-Jat leader in Haryana and enjoyed a good rapport across communities. No one outside his family has ever won from the seat. Bhajan Lal represented the seat in the Assembly nine times, while his son Kuldeep Bishnoi was elected as a legislator from the constituency on four occasions.

As the Congress nominee from Hisar in the 2019 Lok Sabha polls, Bhavya Bishnoi lost to bureaucrat-turned-politician Brijendra Singh, the son of veteran BJP leader Birender Singh.

Bhavya Bishnoi, who is currently enrolled in a Master’s programme in public administration from the John F Kennedy school at the Harvard University, said the entire country is benefitting from the policies of the Narendra Modi government at the Centre and the people of Haryana are also getting the benefits of the schemes of the Manohar Lal Khattar government.

Kuldeep Bishnoi said the achievements of the BJP-led governments at the Centre and in Haryana are among the main issues on which they are seeking votes.

AAP’s Satender Singh said as in the Punjab Assembly polls held earlier this year, bastions will be broken this time in Adampur too.

INLD candidate Nambardar has been raising the issues of farmers.

The Congress, on the other hand, feels that Jai Prakash is its best bet to upset the BJP’s applecart as the former Union minister enjoys a considerable influence in Hisar, but whether he will able to prevent a big split in the Jat votes and consolidate a bulk of those in his favour remains to be seen.

State Congress chief Udai Bhan accused Kuldeep Bishnoi of betraying the grand old party and said, “The people of Adampur will teach a lesson to traitors this time.”