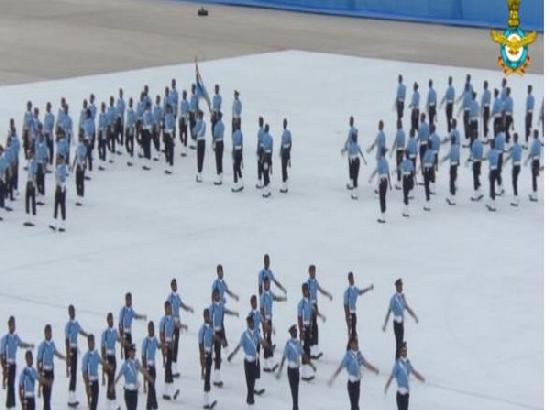 The Indian Air Force on Saturday began celebrations to mark its 90 years of foundation at the Sukhna Lake.

This is the first time that the annual parade and fly-past are being held outside Delhi-NCR. Defence Minister Rajnath Singh wished the force early this morning.

“Greetings and best wishes to all courageous IAF air warriors and their families on the Indian Air Force Day. The IAF is known for its valor, excellence, performance, and professionalism. India is proud of its men and women in blue. Wishing them blue skies and happy landings,” Singh tweeted.

The IAF will conduct an hour-long air show at the lake with participation by nearly 80 military aircraft and helicopters, including the recently inducted indigenously-built Light Combat Helicopter (LCH) “Prachand” will showcase their aerial prowess during the fly-past.

It is for the first time that the IAF decided to hold its annual Air Force Day parade and fly-past outside the Delhi NCR.The Chief of Air Staff will unveil the new pattern of combat uniform for IAF personnel, officials said on Friday.

Light Combat Helicopter Limited Series Production (LSP) is an indigenously designed, developed and manufactured state-of-the-art modern combat helicopter containing approximately 45 per cent indigenous content by value which will progressively increase to more than 55 per cent for the SP Version.

The new chopper is capable of aerial combat and will help the force combat slow-moving aircraft, drones and armoured columns during conflicts.

Besides LCH ‘Prachand’, several other aircraft including Light Combat Aircraft (LCA) Tejas, Sukhoi, Mig-29, Jaguar, Rafale, IL-76, C-130J and Hawk will be part of the fly-past.

Among helicopters, Advanced Light Helicopter Dhruv, Chinook, Apache and Mi-17 will be part of the aerial display.

Also, on the eve of Air Force Day 2022, the Chief of Defence Staff and the three Service Chiefs laid wreaths at the National War Memorial, paying homage to those who made the supreme sacrifice in service of the nation.

Every year, the day is celebrated in the presence of the Indian Air Force chief and senior officers. The Air Force was officially raised as the supporting force of the Royal Air Force of the United Kingdom in 1932 and the first operational squadron was created in 1933.