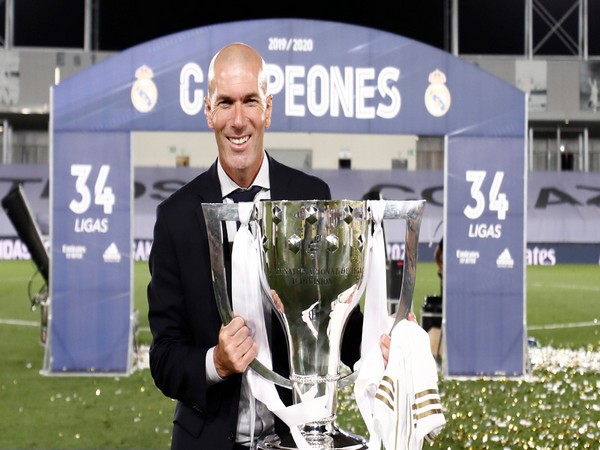 Madrid [Spain], July 18 (ANI): After guiding his side to La Liga title, Real Madrid manager Zinedine Zidane is uncertain about his future at the club beyond contract which holds him at Madrid till 2022.
In his first full season back at the helm, Zidane has led Madrid to success in the Supercopa de Espana and La Liga to take his trophy haul across two spells in the dugout to 11 - three shy of equalling Miguel Munoz's club record.
"Nobody knows what's going to happen in the future. I never talk about next season or the following year. I've got a contract and I'm happy. You never know what will happen in the future," Goal.com quoted Zidane as saying.
"Things can change overnight in the world of football and I have no idea what the future holds," he added.
Real Madrid defeated Villarreal by 2-1 and secured 10th straight win with the help of Karim Benzema's brace.
On the other hand, the second-placed club, Barcelona, suffered a 2-1 defeat at the hands of Osasuna which gave Zidane-led side an unassailable seven-point lead at the top of La Liga table.
The club has not faced even a single defeat since the resumption of La Liga following the coronavirus-enforced break. Zidane wants to win the last same of the sean and end on the winning note.
"We have to find that motivation. It's a league game. When we put on the Real Madrid shirt, we want to win all the games. That's the DNA at Real Madrid. It's a league game, not a friendly, and we want to play well. I don't think we've got anything to prove. We just want to maintain this positive momentum. We want to keep winning.
"We have another big game. We said there were 11 finals. There were 10 and we won the league, but we want to finish in the best way possible. We want to keep pushing and testing ourselves until the very end of the season. There will be a few days' rest after the game against Leganes, but the season continues. We will be back training and preparing for City after the game against Leganes," he added.
In their last game of the 2019-2020 La Liga season, Real Madrid will take on Leganes on July 20. (ANI)

MSP for Khariff crops to be announced on October 1: Andhra CM

Woman returns from Oman with help of Indian govt, says was harassed by employers