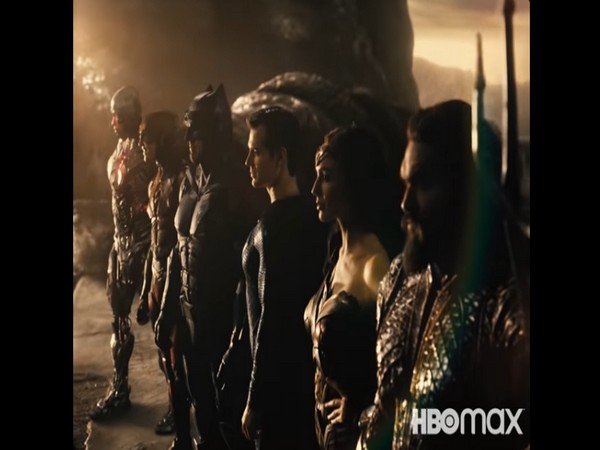 Washington D.C. [USA], August 23 (ANI): During DC FanDome on Saturday, director Zack Snyder debuted his mythical, extended first look of the Snyder Cut of 'Justice League'.
During the virtual convention on Saturday (local time), the 54-year-old director revealed the film will be released on HBO Max in 2021 in four, one-hour segments, as well as having an option to watch it as an unbroken four-hour movie, cited Variety.
He also said there's work on a "distribution plan" to release the movie outside of the streaming service.
The official trailer of his cut of the super-hero film is now available for viewing on HBO Max's official YouTube page.
The two-minute and 43-second long video is set to a version of Leonard Cohen's 'Hallelujah', and shows a darker and more somber tone than the theatrical version, as well as a more up-close look at the apex villain Darkseid, who was not featured in the theatrical version.
According to Variety, during the FanDome panel, Snyder talked at length with two fans who helped to spearhead the #ReleasetheSnyderCut campaign, which Snyder dubbed as a "movement".
"It's been an incredible journey. For us, one of the amazing parts is that we were able to interact with and be part of this fan community in an amazing way. It's changed us and made us really grateful for being able to have this dialogue," Snyder said.
Just days after officially announcing the Snyder Cut, the filmmaker dropped a first look at the film's original villain, Darkseid. A few weeks later, Snyder tweeted a clip of Wonder Woman (Gal Gadot) discovering an ancient-looking artifact representing Darkseid. And in July, Snyder appeared during the independent fan convention JusticeCon to debut a brief clip of Superman (Henry Cavill) in his black suit, reported Variety.
Fans have long surmised that there is a director's cut of the widely criticised 'Justice League', which was finished by director Joss Whedon after Snyder departed during production.
The American director had completed the majority of work on the super-hero movie in 2016 but stepped away from post-production and editing in light of a family tragedy.
Warner Bros. brought in 'The Avengers' director Joss Whedon to step into Snyder's shoes for reshoots and tweaks.
The Warner Bros. flick opened to discouraging reviews and reportedly caused a loss of about USD 60 million to the studio, as it was one of the most expensive films ever made.
DC fans, including many other Hollywood celebrities, have long waited to see Snyder's original vision. (ANI)