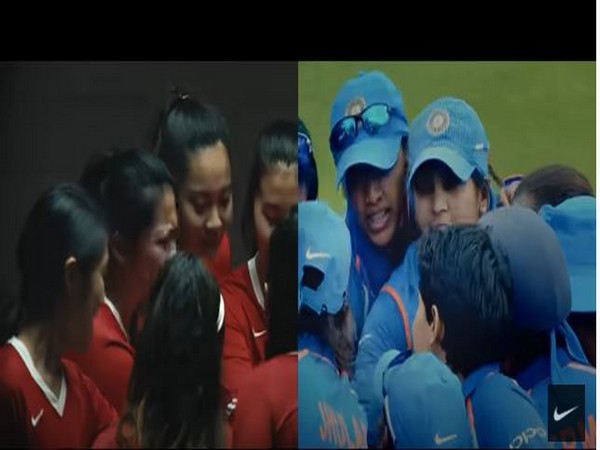 New Delhi [India], Aug 2 (ANI): With over 32 million views on YouTube so far for its recent 'You Can't Stop Us' sports commercial, Nike, one of the most renowned apparel brands, has hit the right chords in a pandemic-striken year.
Using old footage of sportspersons with themes seemingly relevant to the society could be a tricky job, but Nike has managed to resonate with people from all walks of life, regardless of their affiliation to sports.
The biggest highlight of the commercial is that it features both able-bodied and disabled athletes to give away the message of 'sport knows no disability'.
The commercial also addresses coronavirus pandemic, as the split-screen throughout the video highlights images of workers spraying down seats inside the stadiums.
Indian women's cricket also features in the video, and athletes like Rafael Nadal, Cristiano Ronaldo, Venus Williams are also a part of this marvelous campaign.
LeBron James, Naomi Osaka, Eliud Kipchoge, Rory McIlroy, and Colin Kaepernick are some of the athletes who also make their presence felt in this particular campaign.
The 1 minute 31 seconds long commercial has a split-screen throughout its run time and it gives away the message of inclusiveness by featuring athletes from all religions and ethnicities.
Throughout the run-time, an athlete on one half of the screen mirrors the other athlete on the opposite side and it looks as if they are a single person.
The Black Lives Matter (BLM) movement has gained momentum following the death of an African-American man named George Floyd, after a police officer, later identified as Derek Chauvin, pressed his knee on Floyd's neck in a viral video.
Ever since then, different sports have done their bit to show solidarity with the 'Black Lives Matter' campaign.
Addressing this particular issue, Nike in its commercial 'You Can't Stop Us', portrays how athletes have taken the knee in the past in order to show their solidarity with the anti-racism movement.
The entire video is narrated by American women's footballer Megan Rapinoe, who is known to make her voice heard for various raging issues.
Ever since its release, many Twitter users took to the platform to praise the commercial and many have picked it as 'The Greatest of All Time'.
The pandemic had forced all major sporting action across the world to come to a halt for almost three months, but now slowly and steadily, most sports are standing back on their feet. (ANI)