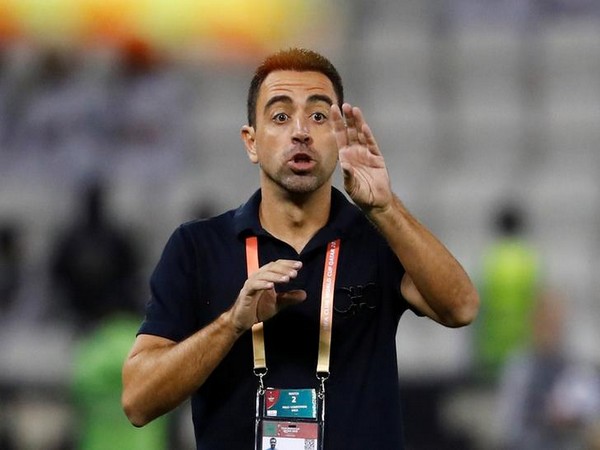 Doha [Qatar], July 30 (ANI): Qatar Stars League side Al-Sadd on Wednesday announced that head coach Xavi Hernandez has returned to the club's training centre after recovering from coronavirus.
The club said Xavi had contracted COVID-19 around 14 days ago and on Wednesday, the former Barcelona player rejoined the squad.
"The Al-Sadd first team continued training on Wednesday at the club's training centre, in preparation for the upcoming QNB Stars League Round 19 clash against Al-Ahli, which is scheduled to be played on Monday, August 3 at Al-Janoub Stadium," the club said in a statement.
"Wednesday's session saw the return of head coach Xavi Hernandez, after his recovery from COVID-19, which he had contracted around 14 days ago. Everyone at the training centre welcomed back the coach, as he takes charge again, ahead of some difficult challenges in the upcoming weeks," the statement added.
The club further stated that new arrival Rodrigo Tabata was also 'warmly welcomed' for his first training session, after signing a one-season deal with Al-Sadd.
"Tabata underwent special training with the supervision of the fitness coach, in order to prepare himself to join group training," the statement read. (ANI)

To ward off cancer, other diseases we need to change our lifestyle, focus on innovation

To ward off cancer, other diseases we need to change our lifestyle, focus on innovation

Thank you very much for everything legend: Silva to Lampard

Thank you very much for everything legend: Silva to Lampard