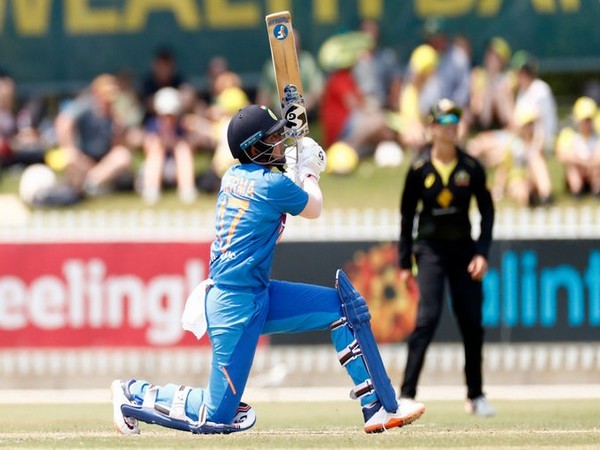 Melbourne [Australia], Feb 8 (ANI): Smriti Mandhana and Shafali Verma played knocks of 55 and 49, respectively, as India women defeated Australia by seven wickets in the ongoing Tri-nation series here at the Junction Oval on Saturday.
Chasing 174, India got off to a quickfire start as openers Shafali Verma and Smriti Mandhana put on 70 runs in the opening six overs. With India looking in firm control, Australia finally got the breakthrough in the ninth over as Ellyse Perry dismissed Verma (49), reducing India to 85/1.
Jemimah Rodrigues next joined Mandhana in the middle and the duo put on 37 runs for the second wicket, consolidating India's position in the match. However, Australia once again staged a comeback as Megan Schutt sent Rodrigues (30) back to the pavilion.
Mandhana and skipper Harmanpreet Kaur settled the nerves by stitching a partnership of 42 runs, but with 10 runs away from the target, India lost the key wicket of Mandhana (55) as Nicola Carey had her adjudged leg-before wicket in the 19th over.
In the end, Harmanpreet (20*) took the side over the line by seven wickets with two balls to spare.
Earlier, Ashleigh Gardner's career-best knock of 93 runs enabled Australia to post a score of 173/5 in the allotted twenty overs.
Australia got off to the worst start possible as the side lost its opener Alyssa Healy (0) in the very first over as Deepti Sharma sent her back to the pavilion.
Gardner, then next came out to bat and she along with Beth Mooney put on 62 runs for the second to revive Australia's innings. India got the breakthrough in the ninth over as Harleen Deol dismissed Mooney (16), reducing Australia to 62/2.
Skipper Meg Lanning then came out to the middle and she along with Gardner put on 79 runs for the third wicket to give Australia an edge in the match.
India got the wickets of Lanning (37) and Gardner (93) to bring themselves back in the match. With Australia 150/4, Perry and Rachel Haynes got together to stitch a partnership of 22 runs, to take the team's score past the 170-run mark.
Brief Scores: India 177/3 (Smriti Mandhana 55, Shafali Verma 49, Ellyse Perry 1-33) defeat Australia 173/5 (Ashleigh Gardner 93, Meg Lanning 37, Deepti Sharma 2-27) by seven wickets. (ANI)