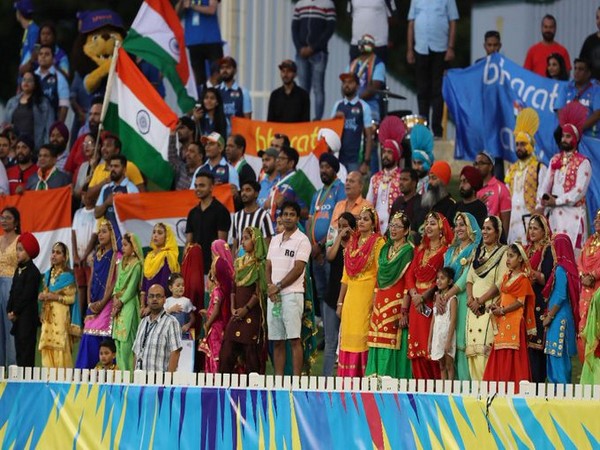 Perth [Australia], Feb 24 (ANI): The Women's T20 World Cup clash between India and Bangladesh on Monday witnessed a historic attendance in the WACA Stadium here which is a record crowd for standalone women's cricket in Western Australia.
The Indian and Bangladeshi supporters came out in numbers to support their teams in the pinnacle of the women's shortest format tournament. 5,280 spectators enjoyed the clash between the two Asian nations at WACA.
"Today's attendance of 5,280 is a record for standalone women's cricket in Western Australia #INDvBAN | #T20WorldCup," T20 World Cup tweeted. 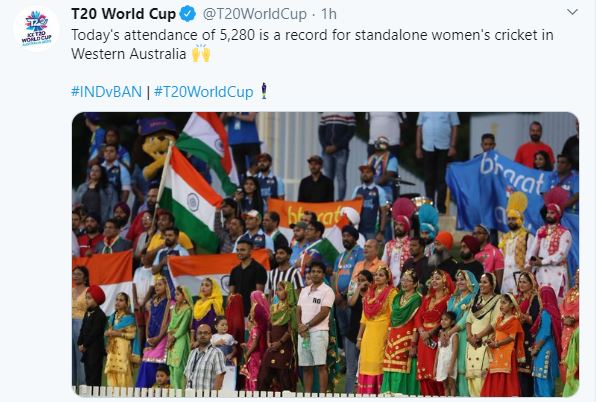 India won the second consecutive match in the event as they defeat Bangladesh by 18 runs after overcoming the defending champions Australia in the opening clash. In the first game too, India had a large number of supporters cheering for the Blues.
Poonam Yadav took three wickets and gave away just 18 runs in her four overs.
Chasing 143, Bangladesh did not had a good start as Shamima Sultana got out after scoring just three runs. Murshida Khatun and Sanjida Islam then put on 39 runs for the second wicket. Arundhati Reddy dismissed well-settled Khatun (30) in the eighth over, reducing the side to 44-2.
In the 11th over, Poonam Yadav removed Isman (10) and in next over Reddy dismissed Fargana Hoque (0).
Nigar Sultana and Fahim Khatun built a short partnership of 28 runs and kept the chase alive. However, Poonam Yadav broke the partnership and dismissed Khatun in the 16th over. Sultana too was dismissed in the next over.
In last over Bangladesh required 22 runs but only managed to score three runs handing 18 runs victory to India.
Earlier after being put to bat, India lost opener Taniya Bhatia in the second over of the game. However, Shafali Verma dominated Bangladesh bowlers and smashed the balls out of the park.
Verma and Jemimah Rodrigues continued to score runs at a quick pace as side crossed 50 runs mark in 6th over. Verma's brilliant innings of 39 runs off 17 balls came to end after she was caught on mid-off.
Skipper Harmanpreet Kaur then joined Rodrigues at the crease and the duo partnered for 25 runs. Panna Ghosh dismissed Kaur in the 10th over, reducing the side to 78-3. Rodrigues got run out in 14th over after scoring 34 runs off 37 balls.
India were reduced to 113/6 after Richa Ghosh and Deepti Sharma got out in quick succession. Veda Krishnamurthy and Shikha Pandey took the side to 142 in allotted 20 overs. (ANI)