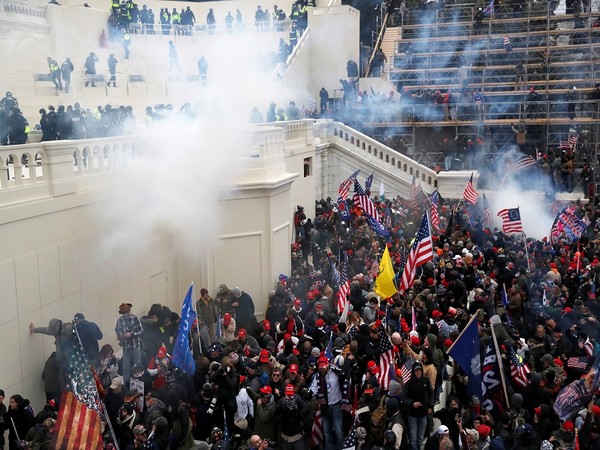 Washington [US], February 24 (ANI): White supremacists were involved in the January 6 insurrection, said top Capitol security officials on Tuesday (local time) during the Senate hearing on the intelligence and security failures at the Capitol.
According to CNN, Sen Amy Klobuchar, a Democrat from Minnesota, asked the officials, "Would you agree that this attack involved white supremacists and extremist groups?"
All the officials who were testifying answered "yes." The officials were former US Capitol Police Chief Steven Sund, former House Sergeant at Arms Paul Irving, former Senate Sergeant at Arms Michael Stenger, and DC Metropolitan Police Acting Chief Robert Contee.
CNN has previously reported on the presence of far-right extremists, anti-government militants, and white nationalist groups among the mob of pro-Trump rioters that stormed the Capitol on Jan. 6. One of the rioters went viral for his "Camp Auschwitz" sweatshirt that referred to the Nazi-era concentration camp.
In recent weeks, some right-wing figures have downplayed or denied the role of racist groups in the attack. For instance, Fox News host Tucker Carlson said on his show Monday night, "There is no evidence that white supremacists were responsible for what happened on January 6. That's a lie," CNN reported.
On January 6, a group of Trump supporters stormed the US Capitol to protest legislators confirming electoral slates from battleground US states they thought were invalid.
Trump had made a speech among thousands of supporters reiterating his claim a massive voter fraud had robbed his election victory and encouraged supporters to maintain support to "stop the steal."
Moreover, five people died in the riot, including one police officer as well as one Air Force veteran and Trump supporter who was shot dead by police. (ANI)