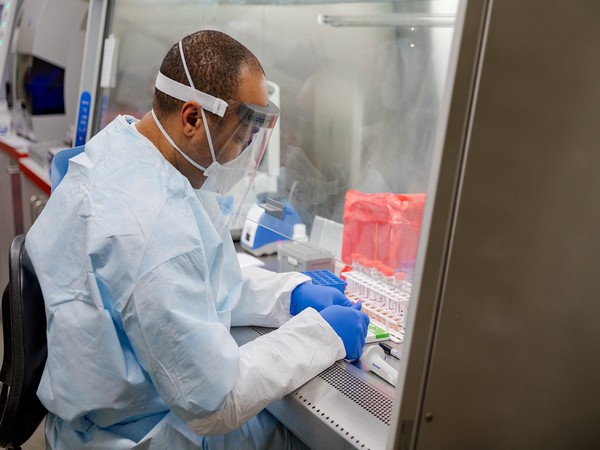 Washington DC [USA], June 16 (ANI): Despite risks involved, several people across the world are volunteering for the trial of COVID-19 vaccine, allowing the researchers to inject potentially deadly microbes inside their nose.
Doctors first give the volunteers experimental vaccine, thereafter they are exposed to the deadly pathogen. If the dose works and prevents healthy volunteers from getting ill, then the study can move forward, The Washington Post reported.
Similar methods were used to work up malaria and cholera vaccines which are now being used to produce the coronavirus vaccine. Although similar methods are being employed to produce the COVID-19, there some doctors who don't agree with the approach as it raises some ethical points.
Question is being out on how right is the process to inject a person with a virus that killed over 435,000 people worldwide, with no cure available. Even in the past, trials were usually permitted only for an illness that isn't fatal or that have treatments available.
According to the US daily, large-scale trials of coronavirus vaccine candidates are scheduled to start this summer and fall with more conventional methods.
Lehua Gray, a 32-year-old product manager in Austin, who wants to be a volunteer said her interest in participating in a challenge trial, "it starts out being a conversation about FDA processes and ends up being a conversation about how I'm about to risk my life," she said.
Despite several risks, Gray is among 28,000 other volunteers, who have signed up for an online organization, 1Day Sooner, with the aim to combat the virus by placing themselves in the path of the deadly contagion.
Amid approaching Phase 3 trial, which is the lengthiest, Food and Drug Administration approval will be required, and thousands of participants will receive an inoculation, either an experimental vaccine or a placebo.
Experts say that this final process in vaccine creation can take six months or more.
Charles Weijer, a professor at Canada's Western University, said coronavirus challenge trials present the hardest question he has faced in 24 years of practice as a bioethics.
"Most ethicists agree there is an upper limit of risk," said Seema Shah, an ethics professor at Northwestern University's Feinberg School of Medicine. "It wouldn't be kay to sacrifice one individual for the benefit of many others."
In April, several of members of the House of Representatives urged Health and Human Services Secretary Alex Azar and FDA Commissioner Stephen Hahn to consider implementing challenge trials.
"If this went all wrong, and some healthy volunteer died as a result, that would be impossible to forgive ourselves," Collins, the NIH director, said.
In May, Collins and other experts from US vaccine effort asked for an independent panel of specialists in ethics, clinical trials for ongoing vaccines experiments.
Johnson and Johnson chief scientist Paul Stoffels has that the company was was focused on a traditional large-scale trial slated to begin in mid-September and not giving much consideration to challenge trials.
"We don't think, at the moment, it will help in the speed to results," Stoffels said, noting that important scientific work would have to be done to develop a model for challenge experiments.
According to the Post, if countries are successful at controlling their outbreaks, it will pose an obstacle to vaccine researchers who in traditional trials.
The obstacles are formidable. Infecting healthy people with a potentially lethal virus, with no treatment to save them from severe illness or death, raises some of the most fraught ethical, scientific and philosophical issues in the history of medicine.
"If the disease gets to a very low level, maybe challenge studies will have to be considered," Pascal Soriot, chief executive of AstraZeneca, said at a briefing with other pharmaceutical executives.
Even Bill and Melinda Gates Foundation, sponsors of influenza challenge trials, are worried that if the covid-19 challenge trials proceed and people die.
"People we are really worried about -- the elderly and with chronic diseases -- would not be volunteering," Collins said.
"And can you really extrapolate from saying this 22-year-old recruit from the military did fine, that 72-year-olds and people with [chronic obstructive pulmonary disease] would do well and be protected?"
"We've done them for malaria, influenza, shigella. What makes me personally cautious about doing them for SARS-CoV-2 is, at the moment, we don't have a rescue medication," Kathleen Neuzil, director of the Center for Vaccine Development and Global Health at the University of Maryland School of Medicine.
If challenge trials were to proceed, she said, "this is going to take some very careful thought and very careful planning."
As things stand, people are coming in great number to support the global effort at producing the COVID-19 vaccine at the earliest.
Combating COVID-19, sign-ups of 'TheCovidChallenge.org' has surged dramatically and has garnered more than 28,000 volunteers so far.
The organization is collecting donations, which will be used to pay for a USD 50,000 research survey on volunteers.
Additionally, many people with backgrounds in various fields are signing up with the organization saying the trials "could provide a sense of purpose in a time of chaos and helplessness." (ANI)