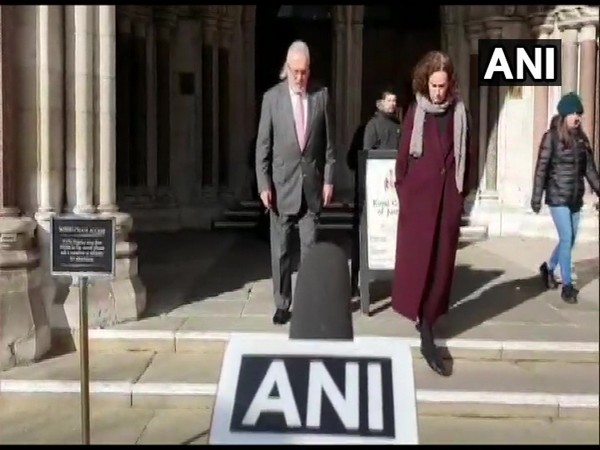 London [UK], Feb 11 (ANI): Fugitive liquor baron Vijay Mallya on Tuesday refused to answer any questions put up by mediapersons outside the UK High Court, where he has appealed against his extradition ordered by Westminster Magistrates Court.
Asked how the hearing has been going so far, Mallya answered, "I would not like to say anything."
The UK High Court, earlier today, commenced the hearing on Mallya's appeal against the Westminster Magistrates' Court order extraditing him to India to face alleged fraud and money laundering charges amounting to Rs 9,000 crore.
Mallya was present in the court along with his counsel Clare Montgomery during the hearing. Officials from Enforcement Directorate (ED) and Central Bureau of Investigation (CBI) along with counsel Mark Summers representing the Indian government were also present.
When the judge asked if there was a timeline in the case, Clare said," This is a very dense case and it has proved extremely difficult."
Summers said, "The court knows we have provided detailed evidence."
Meanwhile, Montgomery further told the Royal Court of Justice today that the Westminster Magistrates Court's Chief Magistrate Judge Emma Arbuthnot, who had ordered Mallya's extradition in 2018, had considered only selective evidence related to the case.
However, the Judge, hearing the case, interrupted Clare saying that he does not think that Arbuthnot had not considered all evidence into account.
The 63-year-old businessman fled India in March 2016 and has been living in the UK since then.
In July last year, The Royal Court of Justice had granted Mallya permission to appeal against the magistrates' court's extradition order, which was signed off later by former UK Home Secretary Sajid Javid. (ANI)