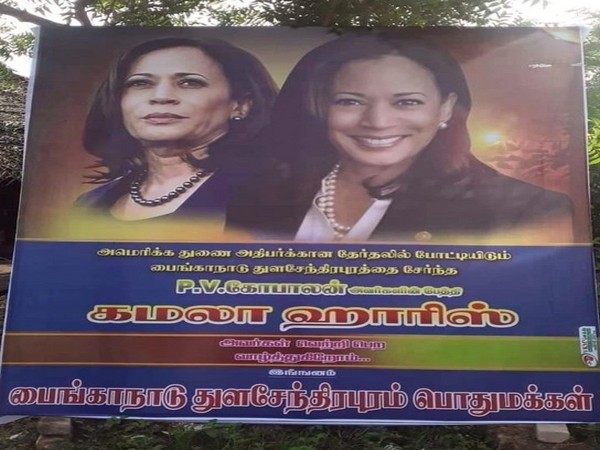 Washington [US], August 17 (ANI): Meena Harris, the niece of Democratic vice presidential nominee Kamala Harris, on Sunday (local time) shared a photo of a poster that has come up in Tamil Nadu featuring the California senator calling her "victorious".
Taking to Twitter, Meena, a 35-year-old lawyer based in California, said that the photo of the poster was sent to her from Tamil Nadu. The poster has photos of Harris with a text in the Tamilian script--"PV Gopalan's granddaughter is victorious".
The poster cropped up days after Kamala was picked by Joe Biden, the presumptive Democratic presidential nominee, as his running mate in the US election. Born to a Jamaican father and an Indian mother, California Senator Harris, if elected, would be the first woman vice president ever for the country.
"I was sent this from Tamil Nadu where our Indian family is from. It says 'PV Gopalan's granddaughter is victorious.' I knew my great grandfather from our family trips to Chennai when I was young--he was a big figure for my grandma and I know they're together somewhere smiling now," Meena tweeted.
Kamala's mother, Shyamala Gopalan, was born in Chennai before she moved to the US for further study. Shyamala became a leading cancer researcher and activist.
Shyamala was the daughter of PV Gopalan, a high-ranking civil servant.
Speaking during an event on Saturday, Kamala recalled her 'long walks' with her grandfather during her childhood visits to India.
The California senator remembered how she and her grandfather would go on long walks in what was then called Madaras where the latter would tell Harris about "heroes" who were involved in the freedom struggle in India. She said that the lessons from her grandfather P V Gopalan, are a big reason "why I am where I am today".
"In Madras, I would go on long walks with my grandfather, who at that point was retired, and we take morning walks where I pulled his hand and he would tell me about the heroes who are responsible for the birth of the world's biggest democracy, and he would explain that 'tt's on us to pick up where they left off'. Those lessons are a big reason why I am where I am today," she added. (ANI)