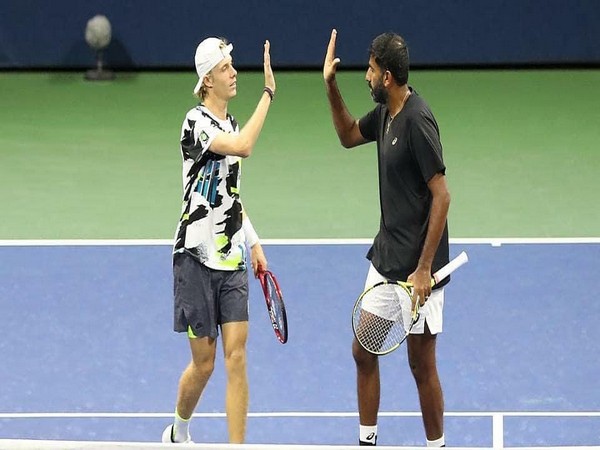 New York [US], September 8 (ANI): Indian tennis player Rohan Bopanna and his Canadian partner Denis Shapovalov on Tuesday failed to secure a semi-final spot in the US Open after losing to the Dutch-Romanian duo of Jean-Julien Rojer and Horia Tecau.
In the men's doubles quarterfinals, Rojer and Tecau secured a 5-7, 5-7 win against the Indian-Canadian pair to advance in the competition.
Rojer and Tecau will now compete against Mate Pavic and Bruno Soares.
The Croatian-Brazilian team had defeated Jamie Murray and Neal Skupski, last week's Western & Southern Open finalists, 6-2, 7-6(4) on Monday in the quarter-finals. It is the first time they have reached a Grand Slam semi-final as a team.
Earlier, Bopanna-Shapovalov had defeated German pair Kevin Krawietz and Andreas Mies in the second-round clash. After losing the first set, Bopanna and Shapovalov had made a comeback and clinched the next two sets and won the game by 4-6, 6-4, 6-3. (ANI)