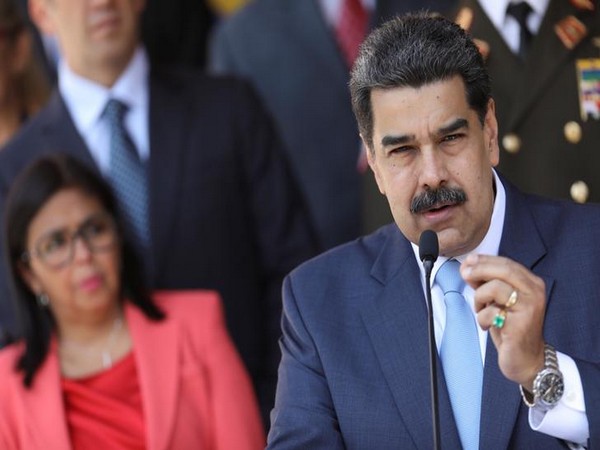 Washington DC [USA], Mar 27 (ANI): US Attorney General William Barr on Thursday announced that the US is pressing criminal charges against Venezuelan President Nicolas Maduro for allegedly facilitating drug trafficking into their country and offered a reward of USD 15 million for information leading to his arrest.
"Today's announcement is focused on rooting out the extensive corruption within the Venezuelan government - a system constructed and controlled to enrich those at the highest levels of the government," Attorney General Barr said, as quoted by the Voice of America.
"The Venezuelan regime, once led by Nicolas Maduro Moros, remains plagued by criminality and corruption," Barr said.
The Justice Department said in a press release that each defendant is charged with four narco-terrorism and drug trafficking-related charges that carry sentences of a minimum of 50 years in prison and a maximum life sentence.
The State Department is offering a reward of USD 15 million for any information leading to the arrest of Maduro and up to USD 10 million for the arrest of each of the other officials. Barr declined to comment on whether the United States will deploy the military to apprehend Maduro and the other defendants.
Moreover, other indicted officials include National Constituent Assembly President Diosdado Cabello Rondon, former director of Venezuela's military intelligence Gen. Hugo Carvajal Barrios, former Venezuelan Army general Cliver Alcala Cordones as well as several members of Revolutionary Armed Forces of Colombia (RAFC).
In 2016, the revolutionary forces signed a peace deal with the Colombian government, ending more than 50 years of conflict. However, the US officials have alleged that several dissenting members of the group, backed by the Maduro regime, are still involved in drugs trafficking.
Barr said the indictment accuses Maduro and the other Venezuelan officials of collaborating with FARC to smuggle cocaine into the US for over two decades. The US Attorney General further accused Maduro of intending to "flood" the country with cocaine in order to undermine the country's well being.
Barr said the United States expects and is exploring all options to gain custody of Maduro and the other indicted officials. (ANI)