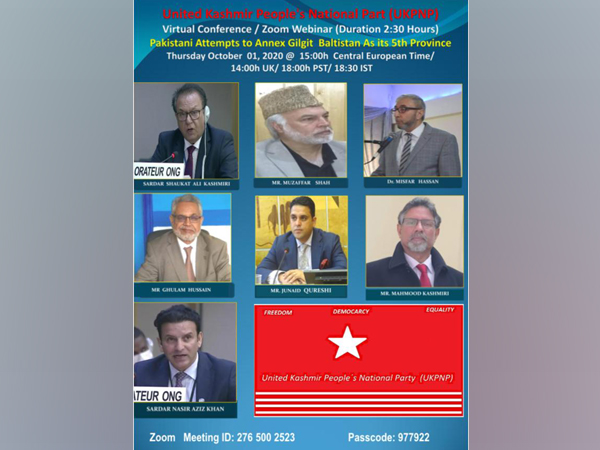 Zurich [Switzerland], September 30 (ANI): Activists Sardar Shaukat Ali Kashmiri, Muzaffar Shah and Misfar Hassan are among the speakers that are scheduled to address the virtual conference on Pakistan's arbitrary plan to annexe Pakistan-occupied Gilgit-Baltistan as its fifth provinces despite opposition by local residents.
The webinar is being organised by the United Kashmir People's National Party (UKPNP). Sardar Shaukat Ali Kashmiri, Chairman UKPNP; Muzaffar Shah, Jammu Kashmir Awami National Conference (JKANC) vice president; Misfar Hassan, Ex.Labor Councillor /President Jammu & Kashmir Liberation League UK & Europe Zone, will address the gathering.
Besides them, Junaid Qureshi Executive Director European Foundation for South Asian Studies (EMS); Ghulam Hussain, Exiabor Councillor/ Senior Vice President Jammu Kashmir Freedom Movement; Mahmood Kashmiri, Chairman Jammu Kashmir National Independence Alliance JKNIA, will also speak during the event.
Pakistan has decided to elevate Gilgit-Baltistan to the status of a full-fledged province, according to a Pakistani minister quoted in a media report.
The Express Tribune quoted Minister Ali Amin Gandapur today said that the government has decided to elevate Gilgit-Baltistan (G-B) to the status of a full-fledged province.
The move has been opposed by people of the region and several political parties.
This move is said to be planned by Pakistan's military establishment. The key opposition leaders such as Maryam Nawaz Sharif have questioned the military's right to take such decisions when a 'democratically' elected parliament is in place.
It was reported that Pakistan opposition parties have decided to boycott a meeting of the country's parliamentary leaders convened by their National Assembly Speaker Asad Qaiser on Monday to discuss the impending elections in the military occupied region of Gilgit-Baltistan (GB).
According to the European Foundation for South Asian Studies (EFSAS), the move to change Gilgit Baltistan's status and turning it into the province by giving it representation on all constitutional bodies is being seen as a "belated response" to India's moves to nullify Articles 370 and 35A in Jammu and Kashmir.
In response to Pakistan's decision to usurp Gilgit Baltistan, India had responded strongly saying that "any action by Pakistan to alter the status of the militarily occupied so-called 'Gilgit-Baltistan' has no legal basis whatsoever and is totally void ab-initio. Our position has always been clear and consistent. The entire territories of the union territories of Jammu and Kashmir and Ladakh have been and are an integral part of India and would remain so. Pakistan has no locus standi to comment on India's internal matters". (ANI)

Yogi thanks people of ‘Bhagyanagar’ for GHMC poll results