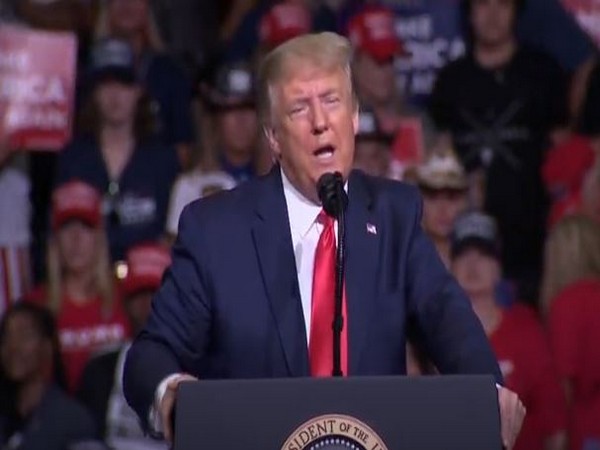 Oklahoma [USA], June 21 (ANI): US President Donald Trump took to stage in Tulsa, Oklahoma, to deliver his re-election campaign speech without wearing a face mask and thousands who attended the rally follow suit.
In an interview with Axios on Friday, Trump said he would not wear a mask at the rally: "Not as a protest but I don't feel that I'm in danger."
Trump also told Axios that he wants rally attendees to "make their own decisions" about wearing a face mask. He didn't encourage or discourage people to wear them, and called masks "a double-edged sword."
"I recommend people do what they want," the President said.
He told Axios, "there was a time when people thought it was worse wearing a mask," adding, "I let people make up their own decision."
Most of the people attending Trump's Tulsa campaign rally also opted not to wear face masks, going against guidance from public health officials and despite the recent spike in coronavirus cases in the state over the past few days.
Images from the rally showed people filling the 19,000-plus seat BOK Center in Tulsa with a majority of attendees not wearing face masks.
Attending large, indoor gatherings without face coverings goes against several guidelines issued by the Centers for Disease Control and Prevention (CDC) and local public health officials.
While touching upon the surge in covid-19 cases in the United States, the President once again raked up the topic of 'Chinese virus' and said his initiative towards staining the fast-spreading coronavirus were effective in controlling the rising number of cases in the country.
"I shut thousands of Chinese from coming to the US in January. I have saved thousands of lives here. And then I stopped the Europeans," Trump told a large group of people gathered at the BOK Center in Tulsa.
In his speech, Trump also attacked the Democrats and radical Left-wingers for spreading fake news against him over his administration's response towards the pandemic outbreak in the country. (ANI)