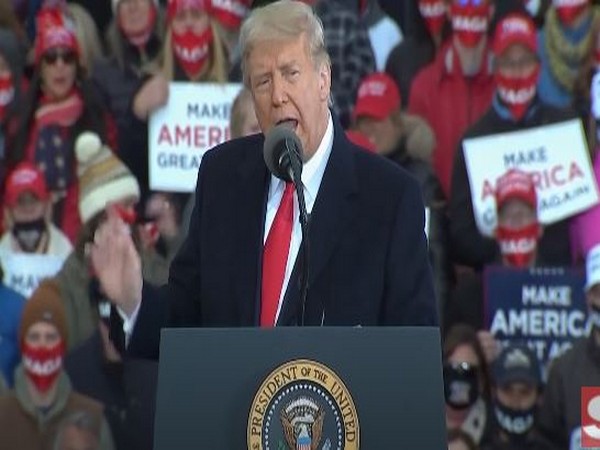 Muskegon (Michigan) [US], October 18 (ANI): US President Donald Trump on Saturday (local time) said that his Democratic Party counterpart works for China adding that no administration -- other than his -- took the toughest-ever action on China.
"I took the toughest-ever action on China--defending Michigan's workers against China's plundering theft. If Biden wins, China will own America--they pay him (Biden) a fortune. He works for China," Trump said at his reelection rally in Michigan.
Trump later during the course of the rally went on to label Biden as a corrupt politician adding that the Biden family is "a criminal enterprise".
"I did more in 47 months than what sleepy Joe Biden did in 47 years. The Democrats are pushing the most far-left agenda ever put forward by a presidential nominee. The Biden plan would destroy social security," he added.
The US President further hit out at Beijing for "flowing in" the 'ChinaVirus' (COVID-19) saying that the US was coming together before the outbreak.
"The country was coming together and then we had the ChinaVirus flowed in. This country was coming together because there is nothing like success. Success was bringing people together," he added.
Trump said that the US has "saved millions of lives" and said that the projected deaths due to COVID-19 were supposed to be 2.2 million "but the fake news never says that".
"We had this horrible plague that came in from China and we are not going to forget that it came from China. It went from all over the world. We had signed an incredible deal with China and ink hadn't even dried, then this happened," Trump said further.
Trump during the conclusion of his rally made the statement that if elected President, he would make the US into a manufacturing superpower and "end our reliance on China once and for all."
The US Presidential Elections took place on November 3. (ANI)