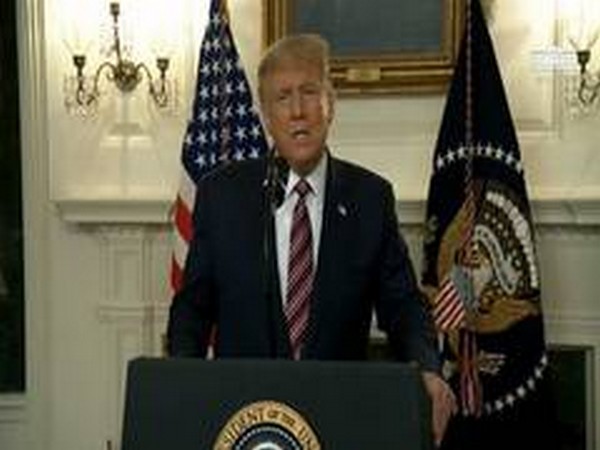 Washington [US], September 11 (ANI): US President Donald Trump on Thursday announced the normalisation of ties between Israel and Bahrain, weeks after it brokered the peace deal between UAE and Israel.
Trump made the announcement of the agreement on Friday, following a three-way phone call he had with Israeli Prime Minister Benjamin Netanyahu and Bahrain's King Hamad bin Isa Al Khalifa. The three leaders also issued a brief six-paragraph joint statement, attesting to the deal.
"President Donald J. Trump, King Hamad bin Isa bin Salman al-Khalifa of the Kingdom of Bahrain, and Prime Minister Benjamin Netanyahu of Israel spoke together and agreed to the establishment of full diplomatic relations between Israel and the Kingdom of Bahrain," according to the statement tweeted by Trump.
"The second Arab country to make peace with Israel in 30 days," he tweeted.
For decades, most Arab states have boycotted Israel, insisting they would only establish ties after the Palestinian dispute was settled.
Bahrain follows the lead of its neighbour, the United Arab Emirates, which reached the peace deal with Israel last month. Both historical agreements will be signed at the White House ceremony next Tuesday.
"This is a historic breakthrough to further peace in the Middle East," Trump, Netanyahu and King Hamad said in the statement. "Opening direct dialogue and ties between these two dynamic societies and advanced economies will continue the positive transformation of the Middle East and increase stability, security, and prosperity in the region." (ANI)