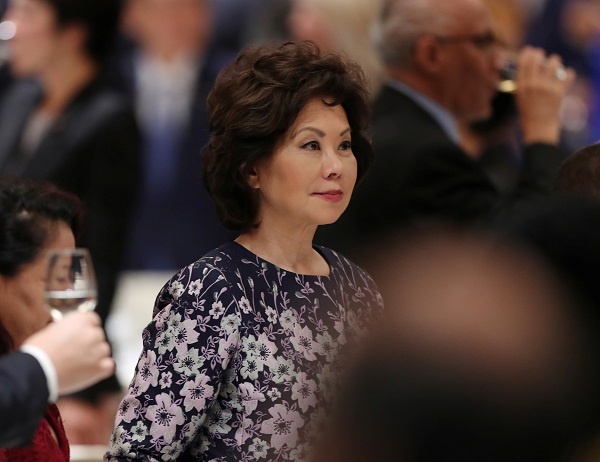 Washington [US], January 8 (ANI): US Transportation Secretary Elaine Chao on Thursday (local time) resigned from her post following a violent incident at the US Capitol where a pro-Trump mob breached the House and Senate chambers.
"Yesterday, our country experienced a traumatic and entirely avoidable event as supporters of the President stormed the Capitol building following a rally he addressed. As I'm sure is the case with many of you, it has deeply troubled me in a way that I simply cannot set aside," she said in a statement.
"Today, I am announcing my resignation as US Secretary of Transportation, to take effect on Monday, January 11, 2020. We will help my announced successor Mayor Pete Buttigieg, with taking on the responsibility of running this wonderful department. With all good wishes to each one of you," added Chao.
Chao said that she was tremendously proud of the many accomplishments achieved by the Department of Transportation and added that she will never forget the commitment of her colleagues for the Department and the US.
This comes as several of Trump administration members resigned from the post following the violence, including White House Deputy Press Secretary Sarah Matthews, chief of staff for First Lady Melania Trump, Stephanie Grisham, and White House social secretary Anna Cristina "Rickie" Niceta.
Chaotic scenes unfolded at the Capitol as supporters of President Trump swarmed the building to protest the Electoral College vote, forcing a lockdown and confrontations with police. Several police officers sustained injuries, while one woman was confirmed dead after being shot in the chest.
Several lawmakers slammed Trump for inciting violence, with some calling for his immediate impeachment and removal. (ANI)