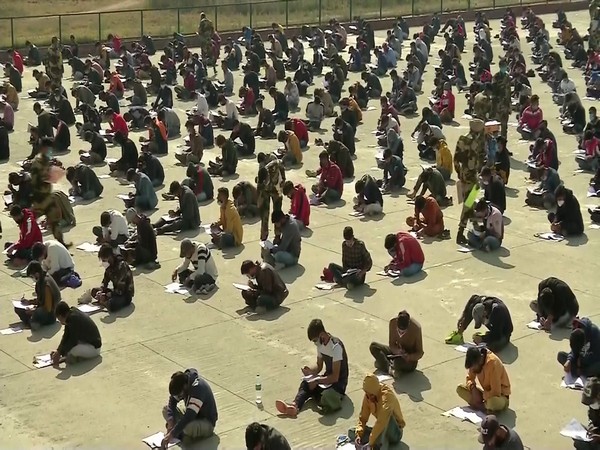 Budgam (Jammu and Kashmir) [India], October 18 (ANI): Thousands of Kashmiri youth turned up for the written round of the Border Security Force's (BSF) recruitment drive at Humhama in Jammu and Kashmir's Budgam district on Sunday which was a continuation of the BSF's policy to reach out to the youth of the Union Territory.
The recruitment drive was part of the several measures taken by the BSF for the betterment of the youth and to provide employment.
According to the Rajesh Mishra, Inspector General, BSF Kashmir Range, there are 1,356 vacant positions in the BSF and the Central Industrial Security Force (CISF) for which 11,000 candidates had turned up for the physical round earlier.

"About 11,000 candidates had initially applied and gone through the physical tests. Out of these, 5,151 male and 438 female shortlisted candidates have appeared for the written test today. The total vacancies are 1,356 for the CISF and BSF combined," Mishra said.
Nine centres in Srinagar, Bandipora, Baramulla, Kupwara, Gurez Tangdhar, Nubra Valley, and three in Ladakh have been opened for this purpose. The entire recruitment process is expected to be complete by the end of November.
"I am glad that the youth of Jammu and Kashmir have turned up in such large numbers for this recruitment drive. This shows that the youth are keen to participate in the security of their country. We should keep encouraging this," the IG added.

Jafar, a candidate said, "Unemployment is rampant in Jammu and Kashmir. People have come from several districts to write this exam. We worked hard for the physical round and have studied hard for the written test today as well."
He added that he would like the government to conduct more such recruitment drives to provide more young people with jobs and opportunities.
Visuals from the drive showed candidates wearing masks due to the ongoing COVID-19 pandemic. (ANI)

Nitish welcomes PM Modi to Bihar, thanks him for assistance during COVID-19 phase

Joint Committee on Personal Data Protection Bill to meet on Oct 28, 29; representatives from Twitter, Google and others to present evidence

Another Kisan Rail from Andhra with 242 tonnes of fruits, vegetables to reach Delhi