Skip to content
Home  »  Sports   »   Thank you for being biggest inspiration in my career: Hardik Pandya to Dhoni 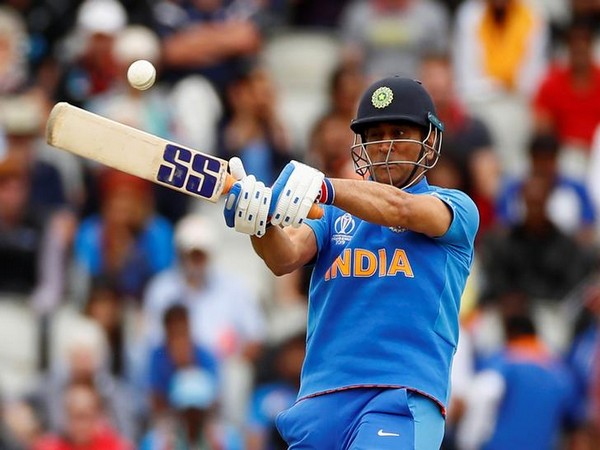 New Delhi [India], Aug 15 (ANI): As wicket-keeper batsman MS Dhoni announced his retirement from international cricket, all-rounder Hardik Pandya lauded the former skipper on an amazing career and thanked him for being the biggest inspiration in his life.
"There's only one #MSDhoni. Thank you, my friend and elder brother for being the biggest inspiration in my career. Will miss playing with you in the blue jersey but am sure you will always be there for me and will keep guiding me #7," Pandya tweeted. 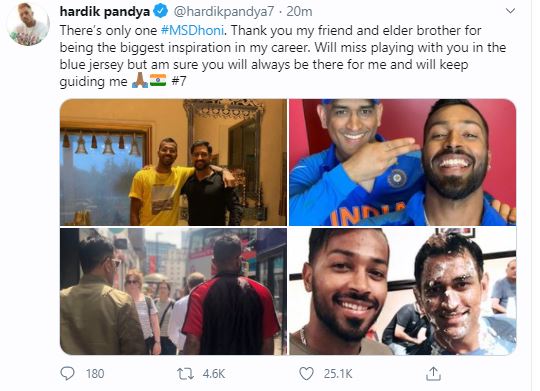 Former India batsman Gautam Gambhir also welcomed Dhoni to the new phase of life and said: "From "India A" to "India" our journey has been full of question marks, commas, blanks and exclamations. Now as you put a full stop to your chapter, I can tell u from experience that the new phase is as exciting and there's no limit to DRS here!!! Well played."
Former India batsman VVS Laxman said it was a privilege for him to play alongside Dhoni.
"Seeing Dhoni's journey from a small-town boy into a match-winner and one of the most astute leaders the world has seen was remarkable. Thank you for the wonderful memories, Mahi. It was my privilege to play alongside you and I will always cherish the memories we shared together," Laxman tweeted.
Former England skipper Michael Vaughan also congratulated Dhoni for having a remarkable career and called him the greatest white-ball captain.
"The 2011 World Cup win was @sachin_rt farewell but masterminded by MS Dhoni ... What an incredible international career ... You could argue the greatest ever white-ball captain and finisher ... Cheers for all the memories MS," Vaughan tweeted.
Talking about Dhoni, Former India spinner and coach Anil Kumble said: "Congratulations @msdhoni on a great international career. It was an honour to play alongside. Your calm demeanour and the laurels you brought as skipper will forever be remembered and cherished. Wishing you the very best."
Earlier today, taking to Instagram, the wicketkeeper-batsman Dhoni shared a video and captioned the post, "Thanks a lot for ur love and support throughout. from 1929 hrs consider me as Retired."
The video had the iconic song 'Mai Pal Do Pal Ka Shayar Hu' from Amitabh Bachchan's 'Kabhie Kabhie' playing in the background, Dhoni shared his incredible journey in the Indian side including his run out in the last game against New Zealand in the World Cup 2019 semifinal.
Minutes after Dhoni's retirement, Suresh Raina also bid adieu, calling time on his 15-year long international career.
For over a decade, Dhoni's swashbuckling batting style, especially the famed helicopter shot, gave international bowlers a headache.
It was on April 5, 2005, when Dhoni had registered his first international century. The former skipper registered the feat against Pakistan in the second ODI of the six-match series. The match was played at the Dr. YS Rajasekhara Reddy ACA-VDCA Cricket Stadium in Visakhapatnam.
Dhoni had made his ODI debut against Bangladesh in 2004. However, he did not have a good outing as he scored just 19 runs in the three-match series. But the wicket-keeper truly arrived in the series against Pakistan in 2005, as he scored 148 runs in the second ODI of the six-match series at Visakhapatnam.
Dhoni has so far played 350 ODIs with his highest score being 183 against Sri Lanka. He also remains the only captain to win all major ICC trophies (50-over World Cup, T20 World Cup, and Champions Trophy).
Also referred to as 'Captain Cool', Dhoni is known for his calmness and exquisite captaincy on the field.
Over the years, he has cemented his place as one of the finest wicket-keepers across the world. His agility behind the stumps has given India many breakthroughs as the Ranchi-based wicket-keeper has done successful stumpings in no time.
He is also known for his knack of opting for reviews and many have jokingly remarked to change the 'Decision-Review System's' name to 'Dhoni-Review System'.
In December 2014, he announced his retirement from Tests and gave a chance to the likes of Wriddhiman Saha. Dhoni called time on his Test career after playing 90 Tests, managing to score 4,876 runs at an average of 38.09. Then in 2017, he handed over the captaincy to Virat Kohli in the 50-over format.
However, the wicket-keeper enjoys a great camaraderie with the latter and the duo have been seen often taking decisions together on the field.
Under Dhoni's leadership, India also managed to attain the number one ranking in Test cricket. His Indian Premier League (IPL) franchise Chennai Super Kings (CSK) has also won the tournament thrice under his leadership.
Dhoni was slated to return to the cricket field on March 29 during the IPL's opening match between CSK and Mumbai Indians. However, the tournament will now be played in the UAE from September 19 to November 10.
He will continue to captain CSK in the IPL 2020. (ANI)