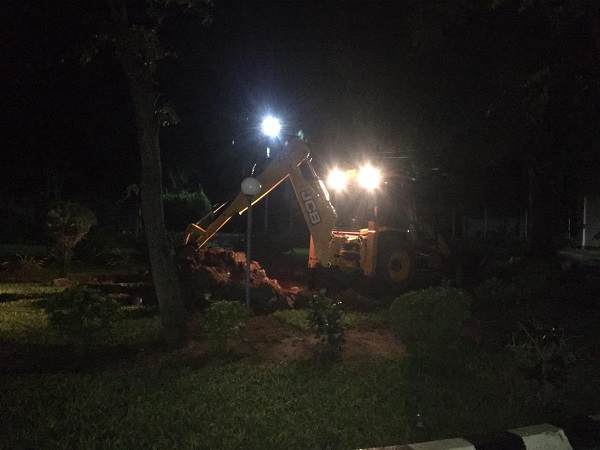 Chennai (Tamil Nadu) [India], January 10 (ANI): Tamil Nadu leaders, cutting across the political spectrum, have strongly condemned the demolition of the Mullivaikkal memorial at Jaffna University campus in Sri Lanka.
Chief Minister of Tamil Nadu Edappadi K Palaniswami took to Twitter to strongly condemn the demolition and said, "The news that a monument erected at the Jaffna University campus in memory of university students and the general public who were mercilessly killed in the final phase of the war in Mullivaikkal, Sri Lanka, has been demolished overnight is shocking."
"I strongly condemn this monthly act of the Government of Sri Lanka which has caused great pain to the Tamils of the world and to the Vice-Chancellor of the University of Jaffna who accompanied it," Palaniswami said in another tweet.
CM Palaniswami's comments came after a Tamil war memorial in Jaffna University was allegedly destroyed by the authorities in Sri Lanka.

Meanwhile, the incident evoked strong reactions from other leaders in the state, including Tamil Nadu Deputy Chief Minister O Panneerselvam and opposition leader and DMK President MK Stalin.
"This despicable act of racism is highly reprehensible as it furthers the sentiment of Tamils while fighting for justice for the people who were mercilessly massacred in the Eelam War. I strongly condemn this unacceptable act," O Panneerselvam, Deputy Chief Minister of Tamil Nadu wrote in a tweet.

Opposition leader and DMK President MK Stalin also took to Twitter and condemned the move. "My strongest condemnation for the demolition of the Mullivaikkal memorial at the University of Jaffna, following the demolition of the traditional monuments of Eelam Tamils! @PMOIndia Condemn this shocking incident! This is the expectation of the Tamils of the world," he said.
The decision to remove the Mullivaikkal War Memorial at the Jaffna University was taken by Vice-Chancellor of Jaffna University Professor Satkunarajah, said University Grants Commission (UGC) Chairman Professor Sampath Amaratunga on Saturday.
The memorial in Jaffna University was built in 2019 in memory of the people and students who died in the Mullivaikkal war in 2009.
Tamil Nadu is due for Assembly polls in the next few months. (ANI)