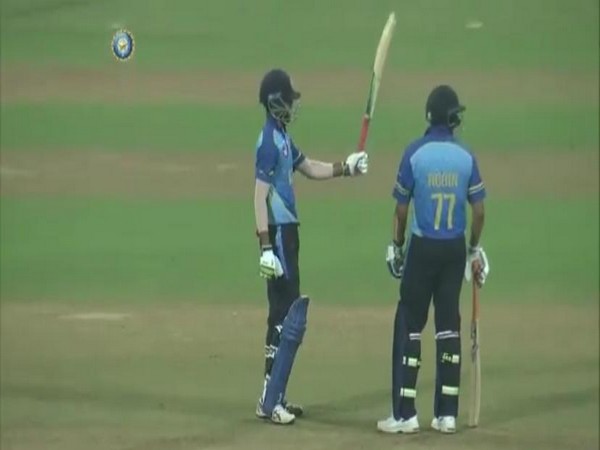 Maharashtra (Mumbai) [India], January 13 (ANI): Mohammed Azharuddeen scored a 37-ball century to power Kerala to a sublime eight-wicket victory over Mumbai in the Syed Mushtaq Ali Trophy at the Wankhede Stadium here on Wednesday.
Azharuddeen played an unbeaten knock of 137 runs off just 54 balls to help Kerala chase a massive target of 197 runs.
Chasing the target, Kerala witnessed a scintillating start, with openers Robin and Azharuddeen playing aggressively from the very beginning. The duo kept the scoreboard running and took the team past 100 runs, with Azharuddeen completing his half-century in just 20 balls.
In the 10th over, SZ Mulani picked the wicket of Robin (33), bringing Sanju Samson out on the field. Despite the wicket loss, Kerala did not let the pace of the chase hinder as they kept hitting the Mumbai bowlers for boundaries, with Azharuddeen completing his century.
Tushar U Deshpande then removed Samson, who scored 22 off 12 balls. Sachin Baby then came out to bat and he, along with Azharuddeen, took the team over the line in the 16th over.
Earlier, after being asked to bat first, Mumbai got off to a good start as Yashasvi Jaiswal and Aditya Tare played brilliantly. Both players hit regular boundaries and took the team over the 50-run mark. Jalaj Saxena handed Kerala with their first breakthrough as he dismissed Tare (42).
Soon after that, Jaiswal, who scored 40 runs, too was sent back to the pavilion, with Suryakumar Yadav and SD Lad taking the field. Suryakumar played with an attacking mindset and scored 38 runs off just 19 balls. Although Mumbai lost wickets on regular intervals, the team maintained a good run-rate to set a competitive target.
Shivam Dube scored 26 off 13 balls while SN Khan added 17 runs from nine balls. For Kerala, Jalaj Saxena and Asif KM took three wickets each.
Brief scores: Kerala 201/2 (Mohammed Azharuddeen 137* (54), Robin 33 (23), SZ Mulani 1/41) defeat Mumbai 196/7 (Aditya Tare 42 (31), Yashasvi Jaiswal 40 (32), Asif KM 3/25) by eight wickets. (ANI)