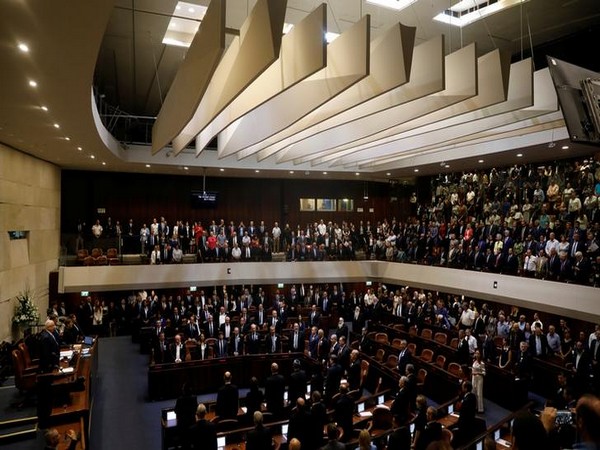 Jerusalem [Israel], Mar 16 (ANI): Three Israeli lawmakers were sworn into the new parliament on Monday afternoon, without the formation of a new government after the elections again produced inconclusive results, Xinhua news agency reported.
The 120 members of Knesset elected to office earlier this month will be sworn in to parliament in batches of three in order to comply with restrictions on the size of gatherings, amid a national campaign to stem the spread of the deadly coronavirus.
According to The Times of Israel, the Knesset announced on Sunday that it will swear its members in 40 rounds of three lawmakers each, adhering to health ministry orders prohibiting gatherings of more than 10 people in an enclosed space.
In the plenum from start to finish will be President Reuven Rivlin, Knesset speaker Yuli Edelstein and the Knesset's secretary, a statement from the Knesset said.
With press and guests not invited to the ceremony for the first time in the parliament's history, no more than 10 people will be present in the plenary at any one time.
The swearings-in will take place in alphabetical order following speeches by Edelstein and Rivlin, which will only be attended by Likud leader Netanyahu, Blue and White head Gantz and Edelstein, the statement said.
Earlier on Monday, the Knesset plenum underwent a thorough disinfecting ahead of the planned events.
On Saturday night, Edelstein vowed that the swearing in of MKs would go ahead on Monday despite the national measures against the spread of the virus.
The number of Israelis diagnosed with COVID-19, the illness caused by the virus, rose to 200 Sunday morning. The health ministry said two of the sick remained in serious condition, with 11 in moderate condition and the rest suffering light symptoms only.
Meanwhile, nearly 40,000 Israelis were in home quarantine for fear of exposure to the virus, including nearly 1,000 doctors, more than 600 nurses, 170 paramedics, and 80 pharmacists, according to health ministry figures. Health officials have conducted over 6,800 coronavirus tests nationwide so far, according to the ministry.
To curb the spread of the virus in the country, all Israelis returning from overseas are required to quarantine at home for 14 days. Non-Israeli nationals were barred from entering the country as of March 12, unless they can demonstrate an ability to self-quarantine for two weeks. (ANI)

‘Siddaramaiah planned to defame me, was the reason my govt fell’: HD Kumaraswamy