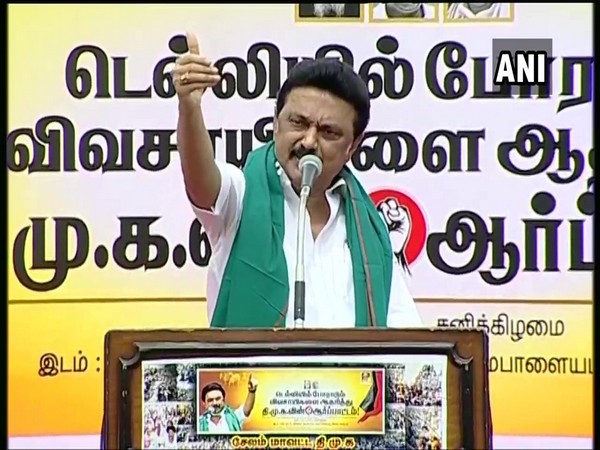 Salem (Tamil Nadu) [India], December 5 (ANI): Dravida Munnetra Kazhagam (DMK) President MK Stalin on Saturday held a protest rally in Salem against the farm laws introduced by the central government and also extended support to farmers' agitation.
"We went to the Court against the laws. Kerala and Punjab have already approached Court. Our Chief Minister says he's a farmer first, why has he not taken any step?" he asked.
Attacking Prime Minister Narendra Modi, he said: "Farmers have waged war against Modi. PM Modi says he is the son of a poor family and campaigned that no farmers will die. But in reality, thousands of farmers died. If PM is really a son of the poor, he should convene a Parliament session and solve it amicably. DMK will continue to support farmers protest in Delhi."
The DMK chief said that there is no mention of minimum support price (MSP) in the farm laws and farmers are demanding that only.
Farmers are protesting against the Farmers' Produce Trade and Commerce (Promotion and Facilitation) Act, 2020, the Farmers (Empowerment and Protection) Agreement on Price Assurance and Farm Services Act, 2020, and the Essential Commodities (Amendment) Act, 2020.
The fifth round of talks between the Centre and farmer union leaders will take place today.
Key routes at Delhi's borders with Haryana and Uttar Pradesh remained choked as thousands of farmers held demonstrations for the tenth consecutive day in their quest to get the three farm laws abolished. (ANI)