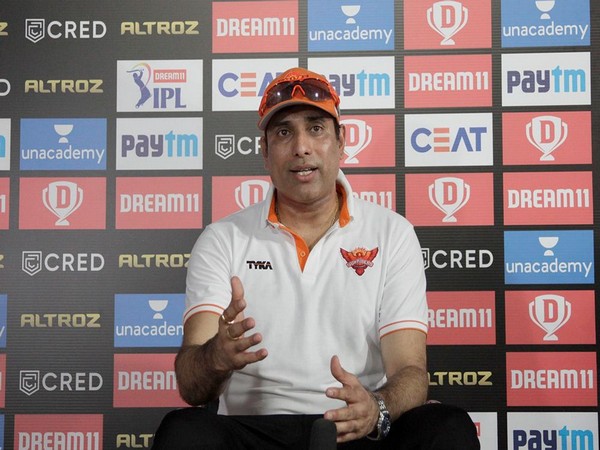 Sharjah [UAE], October 4 (ANI): After suffering a defeat against Mumbai Indians, Sunrisers Hyderabad (SRH) mentor VVS Laxman said his team lost the wickets of skipper David Warner and Kane Williamson at a crucial time during the run-chase.
Mumbai Indians delivered an all-round performance against SRH to secure a 34-run victory over their opponents in the Indian Premier League (IPL) here on Sunday.
Mumbai Indians batters put a massive total of 208 runs on the board before bowlers sealed the win for the team. Warner played a knock of 60 runs but failed to take the team over the line whereas Kane Williamson only scored three runs before being caught behind off Trent Boult's delivery.
Laxman also said that batsmen will learn from this experience and praised Abdul Samad's fast-paced inning of 20 runs from nine balls.
"You have to have wickets in hand but at the same time when you are chasing such a big total, you also have to maintain the run rate. Unfortunately, we lost Kane and Warner at a crucial time, just when Warner was looking to change the gear and picking up the momentum," Laxman said while replying to an ANI query during the virtual post-match press conference.
"Kane's dismissal was also a very crucial one because we know how experienced Kane is to handle various situations. In the end, I felt that it was too much for the youngsters but I was very impressed with how Samad came out and expressed himself. Overall, I think the batsmen will learn from this experience because it is very important to have wickets in hand if you are chasing a big total on this ground," he added.
This was SRH's third defeat from five matches in this season of IPL. The team will next take on Kings XI Punjab (KXIP) on October 8. (ANI)