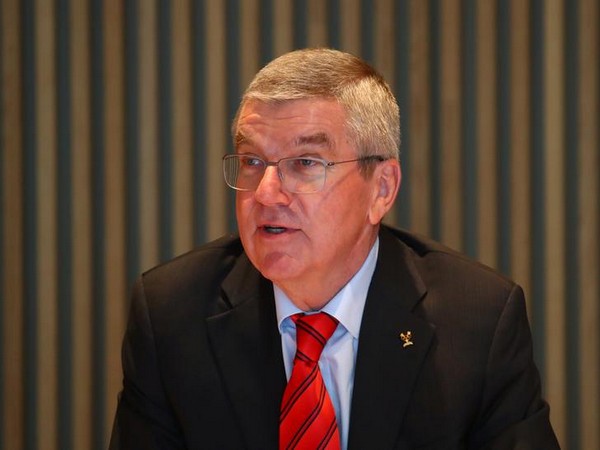 Lausanne [Switzerland], January 28 (ANI): The International Olympic Committee (IOC) president Thomas Bach has put all speculations to rest, asserting that they are "fully concentrated on and committed" to stage the Tokyo Olympics.
IOC Executive Board (EB) meeting took place on Wednesday and after that, Bach spoke to the media, reiterating the IOC's commitment to delivering the Olympic and Paralympic Games Tokyo 2020 this summer.
"We are fully concentrated on and committed to the successful and safe delivery of the Olympic and Paralympic Games Tokyo 2020, starting on 23 July with the Olympic Games and 24 August with the Paralympic Games," IOC's official website quoted Bach as saying.
"In the last couple of days, we had consultation calls with the International Federations and the National Olympic Committees, also getting reports from the athlete representatives. We could experience there today, again, that all of them are fully united and committed; all 206 National Olympic Committees, all the International Federations and the athletes are standing behind these Olympic Games. We see the same commitment on the Japanese side with the Japanese government, the Organising Committee and the Japanese Olympic Committee," he added.
However, Bach also acknowledged the difficulties posed by the ongoing coronavirus pandemic and said they are fighting this fight like Olympics athletes.
"The organisation of the Olympic and Paralympic Games, as such, is already an extremely complex challenge. But this complexity is multiplied when it comes to organising postponed Olympic Games for the first time ever, and this under the conditions of a pandemic. So, there is no blueprint for this, and we are learning every day. This fight against the virus, as you all know from your personal circumstances, is a tough one. But we are fighting this fight for, and like, Olympic athletes. This means with full determination, with a will to win, with hard work every day, and with all the physical and mental strength we have," he said.
Looking towards the future, Bach said that nobody can predict the health situation and this is leading to speculations that are hurting the athletes in their preparations.
"Nobody at this moment can predict the health situation in 206 National Olympic Committees for the time of the Olympic and Paralympic Games, from late July until September of this year -- not even the most prominent scientists in this area. This leads, you may say naturally, you can also say unfortunately, to much speculation. But all this speculation is hurting the athletes in their preparations, who have already overcome the challenges in their daily training and competition with all the restrictions they are facing, either in their country or when it comes to travelling," Bach said.
"So there is speculation about cancellation; I heard about a plan B, about everything. Some even make the proposal to postpone the Olympic Games in Tokyo to the year 2032. I want to say good luck, if you would have to discuss this with an athlete who is preparing for the Olympic Games in 2021. There are some proposals to move it to another city. Everybody who knows about the complexity of Olympic Games knows this is not possible. They're in such a short period of time. For all these reasons, we are not losing our time and energy on speculation. We are fully concentrating on the Opening Ceremony on 23 July this year. We are not speculating on whether the Games are taking place. We are working on how the Games will take place," he added.
Bach said they are working to put COVID-19 countermeasures together "for every possible scenario" and they are relying on the advice of all the different authorities.
"There's the Japanese government, the health authorities, the World Health Organization; we are talking with the manufacturers of vaccines -- with all the experts. From these consultations, we can conclude that it is too early to tell which of the many COVID countermeasures will finally be the appropriate ones when it comes to the time of the Games. We just have to ask for patience and understanding -- from the athletes, from the National Olympic Committees, the International Federations, the Japanese people, the Organising Committee, everybody. We have to be patient and diligent in the same way," he said.
"Soon we will be able to release the first version of the so-called 'playbooks' for the Games, which will explain the measures for the different stakeholder groups, to protect themselves and to protect others. The first version of the playbooks will be presented to the National Olympic Committees and the Chefs de Mission at the beginning of February. So there, they -- the NOCs, the athletes, everybody -- can all trust that we are providing the facts and our planned countermeasures as the situation develops. The priority is always the same -- safe and secure Games," Bach added. (ANI)