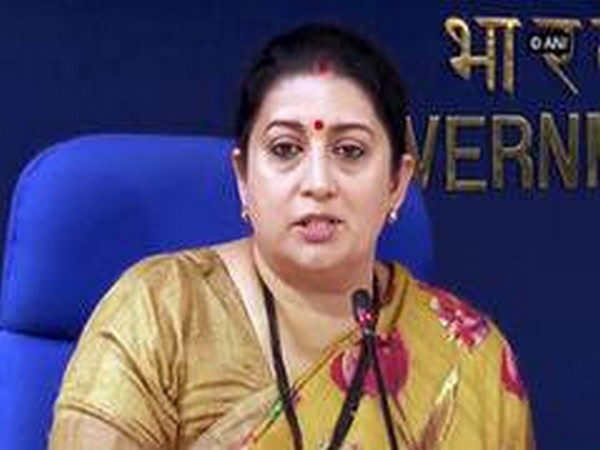 New Delhi [India], June 3 (ANI): Union Minister Smriti Irani thanked Prime Minister Narendra Modi after the Union Cabinet's gave nod for setting up of an Empowered Group of Secretaries (EGoS) and Project Development Cells (PDCs) in ministries.
In a series of tweets, Smriti Irani said, "Thankful to Prime Minister Narendra Modi Ji for setting up Empowered Group of Secretaries (EGoS) and Project Development Cells in Ministries. Decision undertaken to facilitate investors and support domestic industries will boost Make in India and create employment opportunities."
She further lauded the Prime Minister for identifying Textiles and Textiles Machinery as one of the champion sectors and said it will greatly benefit overall textiles manufacturing capacity of the country and help in growth of Indian Textiles in the competitive global market.
In a step to attract investment in the country, the Union Cabinet on Wednesday approved the setting up of an EGoS and PDCs in ministries and departments.
"We know the world situation. Now the industries are thinking to diversify their investments in different locations. To ensure that investment increases in India, an Empowered Group of Secretaries (EGoS) has been formed and simultaneously in every ministry/department there will be Project Development Cells (PDCs)," Information and Broadcasting Minister Prakash Javadekar said while briefing the media about the decisions of the Union Cabinet.
"This will make India more investment-friendly and we also handhold the new industries," he added. (ANI)