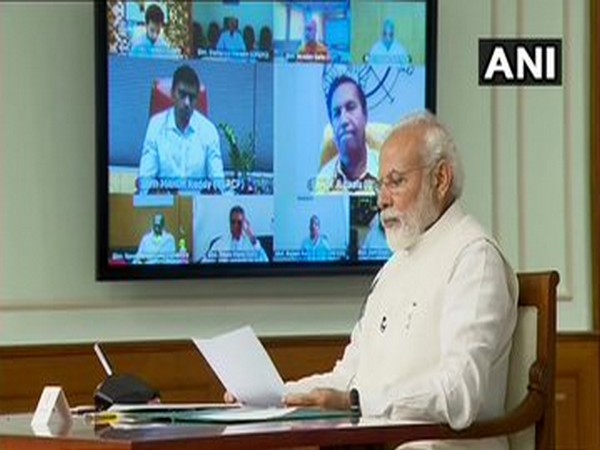 New Delhi [India], April 8 (ANI): Prime Minister Narendra Modi on Wednesday said that the situation due to coronavirus in the country is similar to that of a "social emergency" and added that everyone should continue to stay vigilant, at a meeting with floor leaders of political parties in Parliament, held through video conferencing, on Wednesday.
"The situation in the country is akin to a social emergency. The country has been forced to take tough decisions and must continue to remain vigilant. Several state governments, district administrations and experts have asked for extension of the phase of lockdown," Modi said during the course of the meeting.
The Prime Minister also praised the efforts of state governments working together with the Centre in the fight against the pandemic and noted that the country "has witnessed constructive and positive politics through the coming together of all sections of polity to present a united front in this battle."
He also praised the "sense of belonging, discipline, dedication and commitment with which each and every citizen is contributing in this endeavour, be it in following social distancing, Janta Curfew or the lockdown."
The Prime Minister said that the focus of the government at this point of time was on saving the lives of the people and assured the political leaders that it is committed to overcoming the economic challenges the country is facing due to COVID-19, according to a release.
Various political leaders appreciated the timely measures taken by the Centre to prevent the spread of COVID-19 and assured the Prime Minister that the entire country was with him. The leaders also spoke about "boosting the health and morale of the healthcare workers, ramping up testing facilities, the need to assist smaller states and UTs and tackling the challenges of hunger and malnutrition. They also spoke about economic and other policy measures to boost the country's capability in this battle against the pandemic."
The Prime Minister took note of the suggestions given by the leaders and thanked them for the feedback.
The meeting was attended by Congress' Ghulam Nabi Azad, TMC's Sudip Bandyopadhyay, Shiv Sena's Sanjay Raut, BJD's Pinaki Misra, NCP's Sharad Pawar, SP's Ram Gopal Yadav, SAD's Sukhbir Singh Badal, BSP's Satish Chandra Mishra, YSRCP'S Vijay Sai Reddy and Mithun Reddy, JDU's Rajeev Ranjan Singh among others. (ANI)

4 thoughts on “Situation due to COVID-19 akin to social emergency, says PM Modi at all-party meeting”