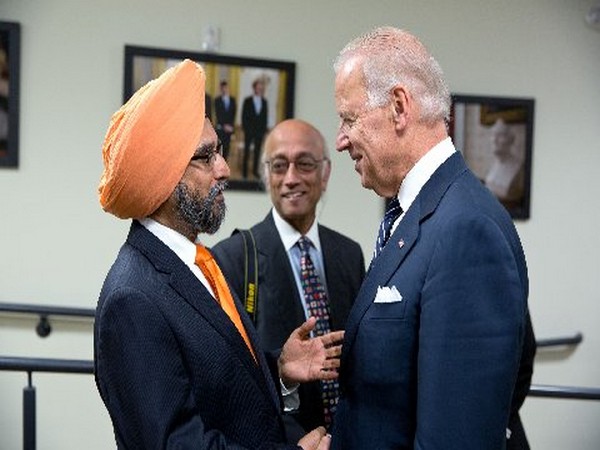 By Reena Bhardwaj
Washington [US], August 6 (ANI): The Sikh community has welcomed Democratic presidential candidate and former Vice President Joe Biden's message on the eighth anniversary of the attack on the gurdwara in Oak Creek, Wisconsin.
Biden said, "Eight years ago, a white supremacist targeted a Sikh temple in Oak Creek, Wisconsin, ultimately taking seven lives in an unspeakable act of terror."
He added, "To truly honour those we lost, it is up to all of us to stand up to bigotry in our lives, give hate no safe harbour and reduce gun violence."
Dr Rajwant Singh, co-founder and Senior Advisor of the National Sikh Campaign (NSC), said, "We are grateful that Joe Biden took time from his busy campaign schedule to remind all Americans about the tragedy, which gripped the Sikh community and the nation eight years ago."
He added, "Sikh community will remain indebted to the Oak Creek Police Department, Mayor of Oak Creek, Governor Scott Walker, US Department of Justice and former President Barack Obama for their support to the community during this very difficult time. America lowered its flags in honour of these victims. Millions of Americans poured love and support to the Sikhs, for which the community will always remain grateful."
He further stated, "We will always remember the sacrifice of Police Officer Brian Murphy who was the first to respond to the fatal shooting rampage at the Sikh Temple of Wisconsin on August 5, 2012. He took 15 bullets and saved many more lives."
Gurwin Singh Ahuja, Executive Director of NSC, said, "We agree with Joe Biden that we as a community and the nation as a whole must stand against bigotry and racism."
Dr Singh, who worked closely with the Obama administration during the crisis in 2012, said, "Combating racism and reducing gun violence certainly are the two critical issues facing America."
The six victims killed included one woman -- Paramjit Kaur (41); and five men -- Satwant Singh Kaleka (65), the founder of the gurdwara; Prakash Singh (39), a Granthi; Sita Singh (41); Ranjit Singh (49) and Suveg Singh Khattra (84). (ANI)