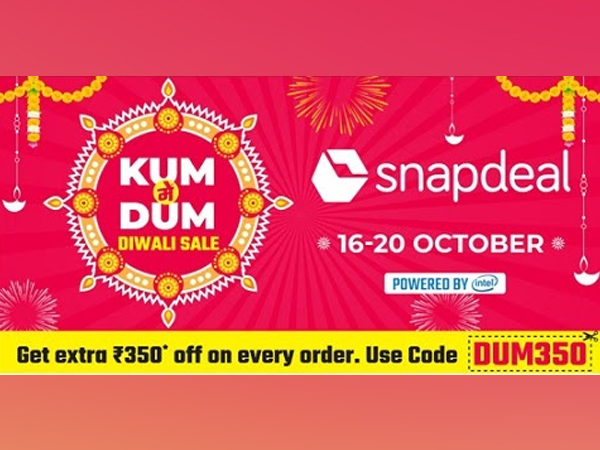 Gurugram (Haryana) [India], October 17 (ANI/NewsVoir): Snapdeal, India's leading e-commerce marketplace, shared early highlights of its first "Kum Mein Dum" Diwali Sale, which kicked off yesterday. Reflecting the increasing depth of e-commerce in India, users from more than 3417 towns & cities across India bought on Snapdeal on Day 1 of the "Kum Mein Dum" Sale. In other words, of the total approx 4041 towns in India, orders were received from 85 per cent of these.
Reflecting the fast expansion of e-commerce amidst new users, nearly 30% of the total orders on Day 1 were from first time users. Consistent with Snapdeal's positioning towards users in non-metro cities, nearly 90 percent of orders were from Tier 2&3 towns.
While populous Tier 2 & 3 cities like Nagpur, Vijayawada, Bhopal, Chandigarh, Ranchi, Patna & Guwahati continued to drive orders on Snapdeal, smaller cities like Sagar (Madhya Pradesh), Raniganj (West Bengal), Gurdaspur (Punjab), Una (Gujarat) also clocked impressive order volumes, exceeding their last year's festive volumes on the very first day of Snapdeal's sale.
Ahead of the sale, Snapdeal added 1300 new pin codes to go deeper into Bharat, into areas which were previously unserviceable or where users were compelled to travel to nearby towns to collect their orders. As per pre-festive projections, orders have now started to flow in from these rural areas. These include small villages like Palasner in Maharashtra, Abdasa in Gujarat, Kalsi in Uttarakhand, Chitkul in Himachal, Chidambaram in Tamil Nadu, amidst others.
"Our early analysis shows that users have shown marked preference for buying everyday use products by utilising deals and additional discounts to maximise value for their purchases. There is also a strong demand for products for festive celebrations at home. The extent of orders coming from smaller cities and towns underscores how rapidly e-commerce has grown in India, especially in recent months," said Snapadeal Spokesperson.
Snapdeal's sale this year has been designed as per feedback received from users. More than 1.25 Lakh Snapdeal users, across 92 cities, had expressed their Diwali preferences for deals on home use gadgets, kitchenware, gift items, fashion and home decor items. In line with the buyer expectations, maximum offers are focused on these categories. Early trends showed that most users were focused on snapping up offers in home, fashion and fitness categories. These include:
Home Products: Small kitchen appliances like blenders, toasters, electric egg boilers sold briskly. Multi-function kitchen tools like choppers, kitchen storage, towels & home linen were widely picked. Bedsheets, bedcovers and home decor items from Rajasthan have been popular among shoppers. Smart cleaning items especially mops, wipers, cleaning towels, disinfectants were also picked.
The sale of traditional products like mandirs, pooja thalis, and prayer books is already 2X of last year.
The increased emphasis on fitness was reflected in the growth of gym essentials, including tummy trimmers, push-up bars, wrist supports, fitness gloves, hand grip strengthener, dri-fit t-shirts, tracks & shorts etc. The growth in this category was also supported by prices of many products being nearly 25 per cent cheaper than last year's prices and also because people continue to stay home.
Ethnic and everyday wear: Everyday apparel, with attractive discounts, was popular with both men and women shoppers - kurtis, sarees, kurta pajamas were widely picked as many of them were on clearance sale. Track pants, t-shirts, and shorts were preferred over formal wear as many shoppers continue to work from home. Masks in ethnic prints were also sold.
Personal care products continued their recent trend of rising sales with shaving & grooming products for men and epilators, wax for women amongst the most bought products. Lotions and moisturisers were also picked.
Snapdeal also tied up with banks and wallets to give further enhanced discounts including 10-15 per cent discounts from Bank of Baroda and RBL bank and cashback offers upto Rs. 500 from Paytm. It is also running a festive promo code "DUM350" which adds discounts upto Rs. 350. All these are in addition to all other existing sale discounts, where many products are already marked down upto 80 per cent.
Snapdeal's "Kum Mein Dum" sale ends October 20.
This story is provided by NewsVoir. ANI will not be responsible in any way for the content of this article. (ANI/NewsVoir)