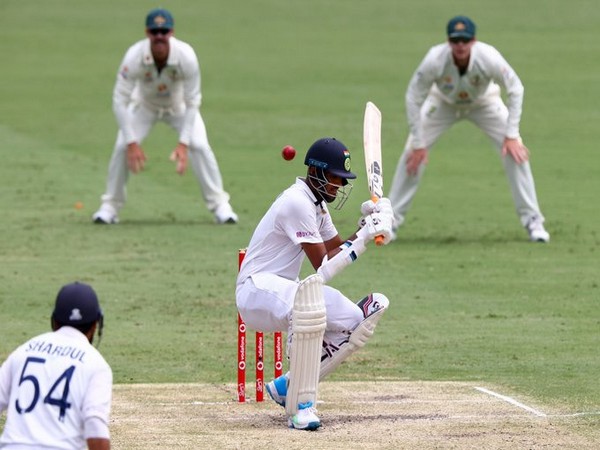 Brisbane [Australia], January 17 (ANI): Shardul Thakur and Washington Sundar on Sunday registered the highest seventh-wicket partnership for India at the Gabba, Brisbane.
The duo achieved the feat against Australia on day three of the ongoing fourth and final Test. Shardul and Sundar have extended their partnership to 67 runs and as a result, the duo broke the record of Kapil Dev and Manoj Prabhakar.
Dev and Prabhakar had stitched together a partnership of 58 runs in 1991, and 20-years later, finally the record has been broken.
Shardul and Sundar joined forces at the crease when India was in a spot of bother at 186/6 and the visitors were looking to avoid being bundled out in a hurry.
The duo mixed caution with aggression and both batsmen were up to the task of capitalising on the loose balls. Sundar and Shardul also faced seven overs with the second new ball, and both batsmen have remained unfazed.
At the tea break, India's score reads 253/6 and the visitors are still trailing by 116 runs. Sundar and Thakur are currently unbeaten on 38 and 33 respectively. The second session saw 92 runs being scored from 27 overs.
Resuming the second session at 161/4, India got off to a bad start as Mayank Agarwal (38) lost his wicket to Josh Hazlewood in just the first over of the session and the visitors were given a major blow. Sundar then joined Rishabh Pant in the middle and the duo put together a brief stand of 25 runs.
Hazlewood once again rose to the occasion for Australia as he dismissed Pant (23), leaving India in a spot of bother at 186/6. Shardul Thakur then joined Sundar in the middle and the duo scored runs at a brisk pace for the visitors.
Earlier, Cheteshwar Pujara and Ajinkya Rahane lost their wickets in the first session on day three as Australia gained an upper hand against India. At the lunch break, India's score read 161/4. The first session saw 99 runs being scored from 34 overs.
On the second day, India had bundled out Australia for 369 as Thakur, T Natarajan, and Sundar scalped three wickets each. Marnus Labuschagne had top-scored for Australia as he played a knock of 108 runs.
After bundling out Australia for 369, Rohit Sharma went on to score 44 runs, but in the end, he ended up gifting his wicket to Nathan Lyon. (ANI)