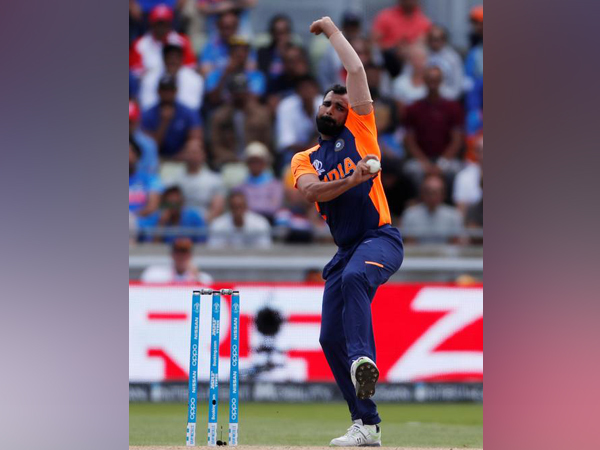 New Delhi [India], April 21 (ANI): India pacer Mohammed Shami on Tuesday revealed what role Zaheer Khan and Wasim Akram have played in shaping his bowling career.
Shami also revealed that growing up he used to look up to Sachin Tendulkar, Virender Sehwag, Zaheer, and Akram.
The pacer was doing an Instagram Live session with batsman Manoj Tiwary.
"When we were growing up, we used to witness that India and Pakistan used to be the most intense matches. Sachin Tendulkar is a great of the game and I looked up at him when I was growing up. The best pair was of Virender Sehwag and Sachin. When it comes to batting, I used to look up to Sehwag and Sachin," Shami said during the Instagram Live session.
"When it comes to bowling, I used to look at Zaheer Khan. When India and Pakistan faced off against each other, I also used to like Wasim Akram. Both Zaheer and Akram were left-arm bowlers," he added.
Shami had a stint with Kolkata Knight Riders and as a result, he got the chance to learn from Wasim Akram as the former Pakistan bowler used to be the bowling coach of KKR.
The Indian pacer also had a chance to learn from Zaheer as the duo enjoyed a stint together at IPL franchise Delhi Capitals.
"When I came to KKR, I realised the skill and value associated with cricket. I watched Wasim Akram all my life on television, but with KKR, I had the chance to learn from him. For the initial days, I was not even able to talk to him.
"Wasim Bhai came up to me then, and he initiated the conversation with me and he started telling me things about bowling. He read me very fast, he realised what I am all about, I learnt a lot from him. If you have someone experienced close to you, then you should not shy away and try to learn maximum things as well," Shami said.
"Zaheer Bhai and I did not play much together, but whenever I got the chance to talk to him, he was very helpful. I spent time with him during IPL stint with Delhi Capitals, Zaheer Bhai is very experienced, I just wanted to learn how to go about bowling with the new ball," he added.
Shami was last seen in action during the two-match Test series against New Zealand.
The pacer would have been in action for the Kings XI Punjab if the IPL had started on March 29.
However, the tournament has been postponed indefinitely due to the coronavirus pandemic. (ANI)