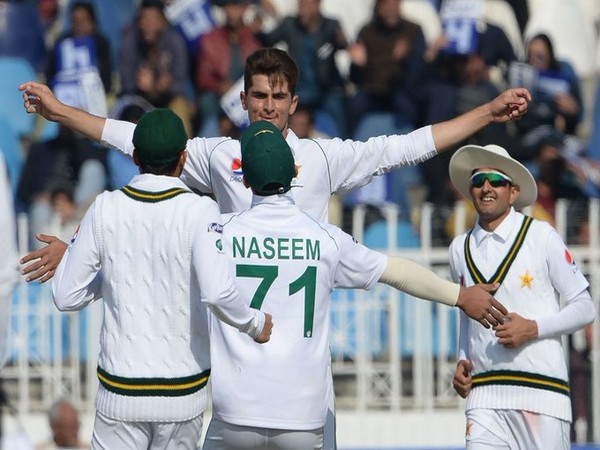 Rawalpindi [Pakistan], Feb 7 (ANI): Pakistani pacers have put the hosts at the dominating position in the first Test against Bangladesh at Rawalpindi Cricket Stadium here on Friday.
The hosts won the toss and elected to field in the first of the two-match series. Bangladesh were bundled out at 233 in 82.5 overs as Shaheen Shah Afridi bagged four wickets while Mohammad Abbas and Haris Sohail clinched two scalps each.
The visitors got off to the worst possible start as they lost their openers cheaply. Saif Hossain was sent back to the pavilion for a duck while Tamim Iqbal departed after adding three runs.
Najmul Hossain Shanto and skipper Mominul Haque stitched a 59-run partnership for the third wicket. Haque was scalped by Afridi after scoring 30 runs.
Mahmudullah joined Shanto in the middle and added 33-run for the fourth wicket before the latter was picked by Abbas. Shanto played a knock of 44 runs off 110 balls.
Mahmudullah played a brief inning of 30-run. Mohammad Mithun and Liton Das built a partnership of 54-run for the sixth wicket. Haris Sohail caught Das in front of the wickets and sent him back to the pavilion. Das scored 33 runs.
Mithun and Taijul Islam added 53-run for the seventh wicket. The latter was dismissed by Sohail after scoring 24 runs.
Mithun smashed highest runs from Bangladesh as he played a knock of 63 runs studded with seven fours and a six. After Bangladesh were all out on 233, the stumps were called on day one. (ANI)