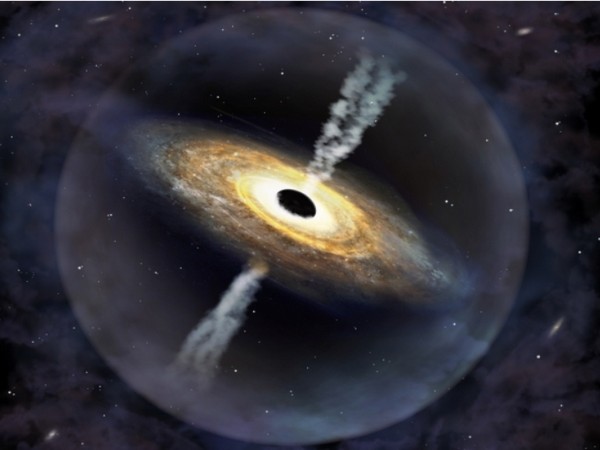 Washington D.C. [USA], May 27 (ANI): Often described as cosmic lighthouses, quasars are luminous beacons that can be observed at the outskirts of the universe, providing a rich topic of study for astronomers and cosmologists. Now scientists have announced the discovery of the second-most distant quasar ever found, at more than 13 billion light-years from Earth.
UC Santa Barbara's Joe Hennawi, a professor in the Department of Physics, and former UCSB postdoctoral scholars Frederick Davies and Feige Wang, provided crucial modelling and data analysis tools that enabled this discovery. The results are currently in a preprint on ArXiv and will appear in the Astrophysical Journal Letters.
The researchers have named the object Poniua'ena, which means "unseen spinning source of creation, surrounded with brilliance" in the Hawaiian language. It is the first quasar to receive an indigenous Hawaiian name.
Quasars are incredibly bright sources of radiation that lie at the centers of distant massive galaxies. Matter spiralling onto a supermassive black hole generates tremendous amounts of heat making it glow at ultraviolet and optical wavelengths.
"They are the most luminous objects in the universe, outshining their host galaxies by factors of more than a hundred," Hennawi said.
Since the discovery of the first quasar, astronomers have been keen to determine when they first appeared in our cosmic history. By systematically searching for these rare objects in wide-area sky surveys, astronomers discovered the most distant quasar (named J1342+0928) in 2018 and now the second-most distant, Poniua'ena (or J1007+2115).
The team first detected Poniua'ena as a possible quasar after combing through large-area surveys. In 2019, the researchers observed the object using the W. M. Keck Observatory and Gemini Observatory on Maunakea, in Hawaii, confirming its existence and identity.
Poniua'ena is only the second quasar yet detected at a distance calculated at a cosmological redshift greater than 7.5, or 13 billion light-years from Earth. It hosts a black hole twice as large as the other quasar known from the same era.
The existence of these massive black holes at such early times challenges current theories of how supermassive black holes formed and grew in the young universe.
Spectroscopic observations from Gemini and Keck show the black hole powering Poniua'ena is 1.5 billion times more massive than our Sun.
"Poniua'ena is the most distant object known in the universe hosting a black hole exceeding one billion solar masses," said lead author Jinyi Yang, a postdoctoral research associate at the University of Arizona.
Black holes grow by accreting matter. In the standard picture, supermassive black holes grow from a much smaller "seed" black hole, which could have been the remnant of a massive star that died.
"So it is puzzling how such a massive black hole can exist so early in the universe's history because there does not appear to be enough time for them to grow given our current understanding," Davies explained.
For a black hole of this size to form this early in the universe, it would need to start as a 10,000-solar-mass seed black hole only 100 million years after the Big Bang -- as opposed to growing from a much smaller black hole formed by the collapse of a single star.
"How can the universe produce such a massive black hole so early in its history? This discovery presents the biggest challenge yet for the theory of black hole formation and growth in the early universe," said Xiaohui Fan, at the University of Arizona.
The discovery of a more exotic mechanism to form the seed black hole may be required to explain the mere existence of Poniua'ena.
The discovery of quasars like Poniua'ena, deep in the reionization epoch, is a big step towards understanding this process of reionization and the formation of early supermassive black holes and massive galaxies. Poniua'ena has placed new and important constraints on the evolution of the intergalactic medium in the reionization epoch.
"Poniua'ena acts like a cosmic lighthouse. As its light travels the long journey towards Earth, its spectrum is altered by diffuse gas in the intergalactic medium which allowed us to pinpoint when the Epoch of Reionization occurred," said Hennawi.
The modelling and data analysis method used to infer information about the Epoch of Reionization from these distant quasar spectra was developed in his research group at UC Santa Barbara with Davies and Wang.
"Through the University of California Observatories, we have privileged access to the Keck telescopes on the summit of Maunakea, which allowed us to obtain high-quality data on this object shortly after it was
Fortunately, Hennawi and his group are developing machine learning tools to analyze this big data and make the process of finding distant quasars more efficient.
"In the coming years the European Space Agency's Euclid satellite and NASA's James Webb Space Telescope will enable us to find perhaps a hundred quasars at this distance, or farther," he said.
"With a large statistical sample of these objects, we will be able to construct a precise timeline of the reionization epoch as well as shed more light on the black hole growth puzzle," he added.

ASI, Bhubaneswar Circle releases list of monuments, sites which will reopen from July 6