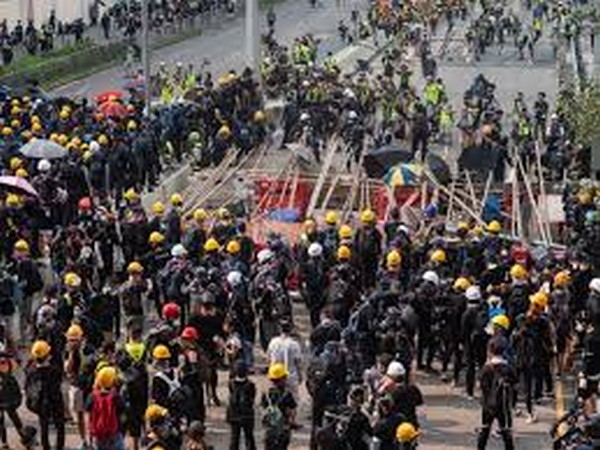 Hong Kong, June 21 (ANI): With China releasing draft of the national security law, the pro-democracy protesters in Hong Kong are making desperate attempts to save their country's special status.
While desperately calling out for help, Patrick Poon, an independent human rights researcher, told the local media that the content of the draft law could have a far-reaching impact on universal values. "The details mean that it's really the end of not only 'One Country, Two Systems,' but also really the end of Hong Kong's autonomy and judicial independence."
"The international community needs to respond to such arrangement more strongly than ever," he said while adding "It will be a disaster for everyone if Beijing's interference in Hong Kong's affairs is not effectively countered with real international pressure."
The Chinese authorities on Saturday divulged details of the new national security legislation for Hong Kong after the three-day meeting of the National People's Congress Standing Committee, Sputnik reported.
The controversial legislation comprises of six chapters and 66 articles. The chapters, inter alia, cover general provisions, duties and mechanisms for ensuring Hong Kong's national security, issues of crimes and penalties, jurisdiction and law enforcement.
The draft document lists the main responsibilities of the Chinese authorities regarding national security, as well as Hong Kong's constitutional responsibility to maintain it. The bill sets out rules for the prevention, suppression and punishment of secessionist activities, attempts to undermine the state authority, terrorist activities, and colluding with foreign states or forces to jeopardize national security.
According to the bill, the Chinese government will establish a national security agency in Hong Kong, which will be responsible for analysing security situation in the special administrative region, making recommendations on the policy in the field of national security, as well as monitoring, coordinating, guiding and supporting Hong Kong in the implementation of national security obligations. Moreover, the body will have to set up a mechanism for cooperation with the region's law enforcement and judicial authorities.
The bill stresses that the central government of China will have very limited jurisdiction primarily confined to special national security matters. (ANI)