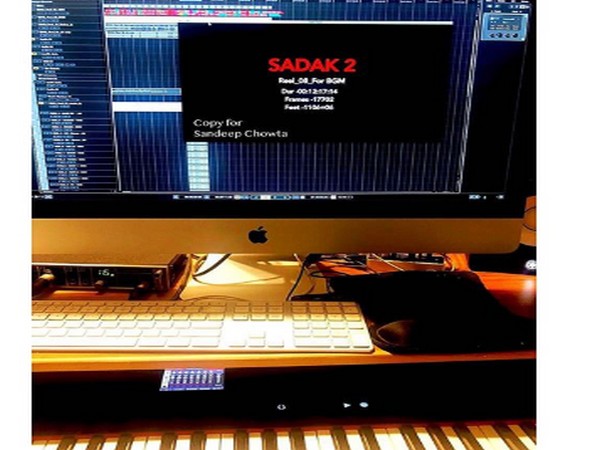 New Delhi [India], July 30 (ANI): Sharing a picture of the production set-up from the studios, actor-filmmaker Pooja Bhatt on Thursday said the composition of the background score of her upcoming film 'Sadak 2' has finished on Thursday.
The 'Zakhm' actor took to Instagram to post a picture of the production set up and revealed that the background score for the second instalment of 'Sadak' has been composed by music composer Sandeep Chowta.
"And with this, the final note has been played & composed for the background score of #Sadak2 by one of my favourite music directors/composers and human beings on the planet -- Sandeep Chowta," she wrote in the Instagram caption.
She went on to heap praises on the music composer further in the caption, sharing that he composed the entire background score for the film in just 20 days.
"How do I thank you enough @sandychow44 Not only for giving us a stunning score in a record time of 20 days through such trying times. But for adding such value to every frame by hand-picking musicians and sensibilities from across the globe and making each frame breathe and sing," she wrote.
"Guess you prove yet again that when the heart is in tune, everything else falls into place. So thank you my dear, dear friend for making this phase so magical & harmonious in every which way," she added.
Bhatt ended the caption by jokingly asking the other departments of the film to pick up speed.
"And yes, now the other departments better make good speed and catch up because as far as the background score is concerned, we're good to go," she wrote.
'Sadak 2' marks filmmaker Mahesh Bhatt's comeback as a director after 21 years. Apart from Pooja, the movie also features Aditya Roy Kapur, Sanjay Dutt and Alia Bhatt in pivotal roles. (ANI)