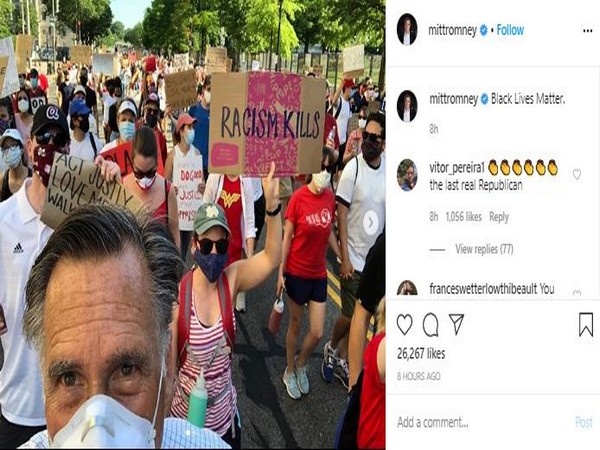 Washington DC [USA], June 8 (ANI): A day after US President Donald Trump withdrew the National Guard from the streets of Washington DC claiming to have the situation under control, Republican Senator and former presidential nominee Mitt Romney became one the few Republicans to publicly say "Black Lives Matter".
On Sunday (local time), Romney wearing a mask marched along with thousands of protesters along Pennsylvania Avenue demanding justice for African-American George Floyd who died in Minneapolis nearly two weeks ago, The Washington Post reported.
Though it is unclear as to when did Romney joined the agitators or when he left the group, he was present when the marchers passed by the Trump International Hotel. At one point of the march, he like many other protesters posted a selfie on his Instagram handle with caption "Black Lives Matter".
The death of Floyd on May 25 has sparked a worldwide movement against police brutality, racism and social injustice, as a video showing a white police officer, Derek Chauvin, kneeling on Floyd's neck after the latter had been arrested was widely circulated online on the next day. (ANI)