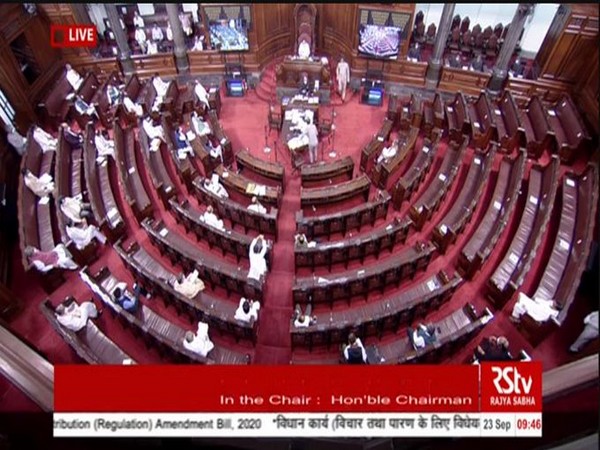 New Delhi [India], September 23 (ANI): The Rajya Sabha passed the Bilateral Netting of Qualified Financial Contracts Bill, 2020 by a voice vote following discussions on Wednesday.
Union Finance Minister Nirmala Sitharaman moved the motion for the consideration of the Bill in the House. In her introduction, she said the Bill has been brought in to ensure financial stability and promote competitiveness in Indian financial markets by providing enforceability of bilateral netting of qualified financial contracts and for matters connected therewith.
"This Bill, if passed, will have a very big bearing on the financial stability of India.... Businesses will have greater affordable resources and, therefore, I would strongly recommend that the House consider passing this bill," Sitharaman said during discussions on the bill in the Rajya Sabha.
"This is absolutely critical for financial stability in the country. This Bill brings in a firm legal basis for bilateral netting between two counter parties. Only bilateral nettings are covered under it as multilateral netting is already taken care of. There is the Clearing Corporation of India Limited (CCIL), which acts a mediator and therefore a regular," she had earlier said.
Earlier, MPs Suresh Prabhu of the BJP, A Vijayakumar of the AIADMK, Sujeet Kumar of BJD and Mahesh Poddar of BJP were among those who participated in the discussions on the Bill.
The House had earlier also passed the Foreign Contribution (Regulation) Amendment Bill, 2020 by a voice vote following discussions.
The FCRA amendment bill was moved for passage by the Minister of State (MoS), Home Affairs, Nityanand Rai in the house. (ANI)