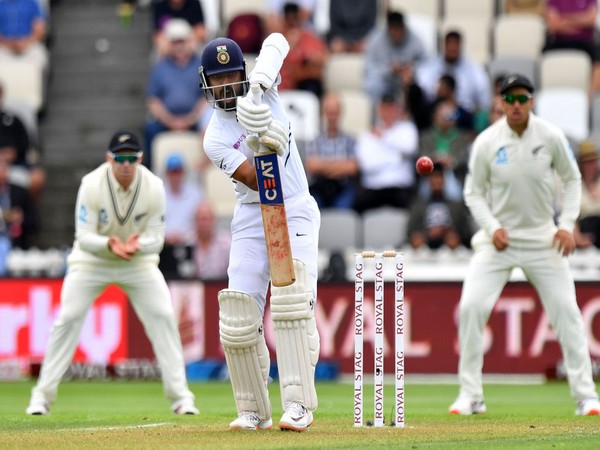 Wellington [New Zealand], Feb 21 (ANI): India vice-captain and middle-order batsman Ajinkya Rahane showed resistance against the fiery New Zealand pace attack on the opening day of the first Test here at Basin Reserve on Friday.
Rain played a spoilsport in the game as the post-tea session was abandoned and the stumps were called off early. India were at 122-5 in 55 overs with Rahane unbeaten at 38 and Rishabh Pant on 10 not out.
New Zealand won the toss and asked India to bat first. Openers Prithvi Shaw and Mayank Agarwal failed to provide a solid start and the former was bowled out by Tim Southee in the early overs of the day.
Shaw, playing in his third Test, scored 16 runs off 18 deliveries including two fours. India's middle-order collapsed as Cheteswar Pujara (11), skipper Virat Kohli (2), and Hanuma Vihari (7) were scalped by debutant pacer Kyle Jamieson, putting the hosts on the driving seat.
Agarwal scored 34 runs and was sent back to the pavilion by Trent Boult. He played a knock of 34 runs studded with five boundaries.
Rahane and Pant have stitched an unbeaten stand of 21-run for the sixth wicket and will try to build a strong partnership to put some runs on the board so that India can make a comeback in the game.
Jamieson bowled 14 overs and bagged three wickets and gave away 38 runs. He bowled two maiden overs as well. (ANI)