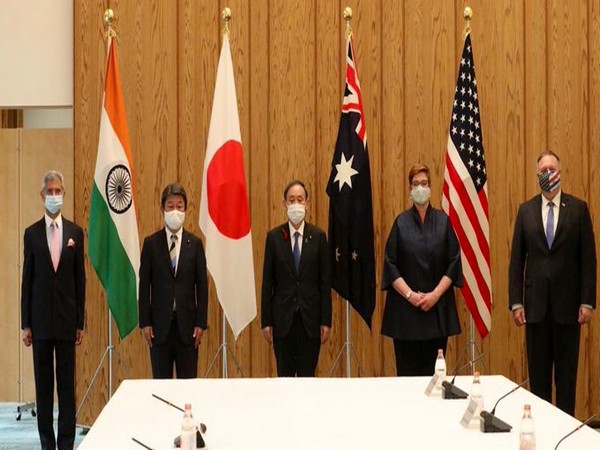 Tokyo [Japan], October 6 (ANI): External Affairs Minister S Jaishankar, along with his counterparts from the United States, Japan, and Australia, met Prime Minister Yoshihide Suga here on Tuesday to discuss bilateral and global dimensions of the "special partnership" of the Quadrilateral group members.
India, the US, Japan, and Australia, collectively form the Quadrilateral group. The ministers -- US Secretary Mike Pompeo, Jaishankar, Australian foreign minister Marise Payne -- are in Tokyo to attend the Quadrilateral foreign ministers meeting.
"Called on PM @sugawitter along with other Quad Foreign Ministers. Spoke about the bilateral and global dimensions of our special partnership," Jaishankar wrote on Twitter.
Earlier in the day, Jaishankar met Pompeo and said that India and the US will work together for stability and prosperity in the Indian Pacific.
Later in the day, Jaishankar, Payne, Pompeo, and Japanese foreign minister Toshimitsu Motegi are slated to hold a quad foreign ministers meeting.
It will be the first meeting of Quad foreign ministers amid border tensions between India and China. A meeting of these leaders was held on the sidelines of the UN General Assembly last year.
The Quad meeting is expected to focus on strategic and security challenges in the region and joint strategy is likely to be discussed.
India-Pacific region is largely viewed as an area comprising the Indian Ocean and the western and central Pacific Ocean, including the South China Sea.
China's territorial claims in the South China Sea and its efforts to advance into the Indian Ocean are seen to have challenged the established rules-based system.
Vietnam, the Philippines, Malaysia, Brunei, and Taiwan have counterclaims in the South China Sea. Beijing's rising assertiveness against counter claimants in the East and South Sea has resulted in unprecedented agreement across the Indian-Pacific. (ANI)