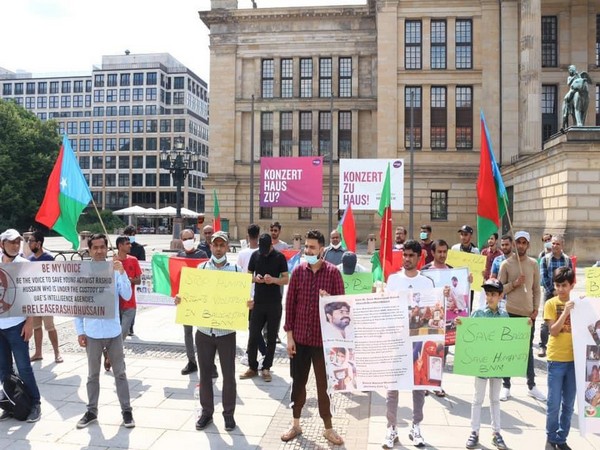 Berlin/Quetta [Germany/Pakistan], June 28 (ANI): Demonstrations were held in Balochistan as well as Germany on Sunday against the illegal and forceful abduction of Baloch political leaders and intellectuals by Pakistan intelligence agencies.
In Quetta city of Balochistan, demonstration was held by Voice for Baloch Missing Persons, a non-governmental organization, which demanded the release of abducted Dr Deen Mohammad Baloch and Dr Akbar Marri.
According to sources, hundreds of people gathered on the streets of Quetta for protest marking Dr Deen Mohammad Baloch's abduction 11 years ago.
Along with Dr Deen Mohammad's Daughter Sammi and Mehlab Deen huge number of Baloch women, men and students participated in the protest. The protesters demanded immediate release of Dr Deen Jan and Dr Akbari Marri and all other missing persons.
Similarly, the Baloch National Movement, a pro Independence Party of Balochistan, also held protests in Berlin to mark the 11 years of his abduction.
The protesters raised the issue of abductions, oppression and gross human rights violations inflicted by the Pakistani state agencies in Balochistan.
Asghar Baloch, Dosteen Baloch and Ali Baloch, the ones who led the demonstrations on behalf of Baloch National Movement, said the Baloch people have been facing the worst form of human rights violation since 27 March 1948 and 'barbarism' is still going on.
The protesters also raised slogans against the abduction of Dr Deen Jan and demanded his immediate releases along with other Baloch missing persons.
"We made several efforts for his (Dr Deen Jan) release. Today's online social media campaign is one of those efforts," Asghar said. (ANI)