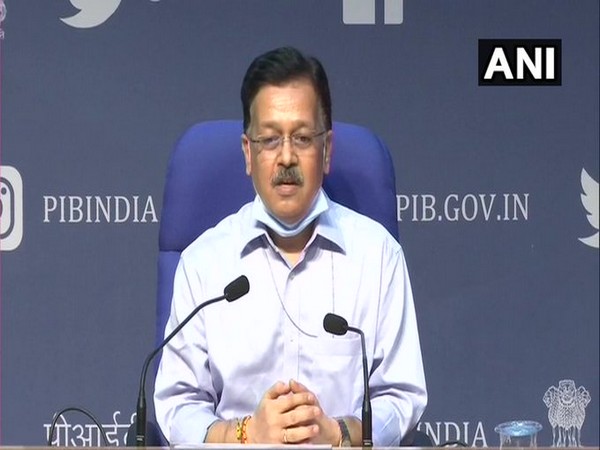 New Delhi [India], July 14 (ANI): The Union Health Ministry on Tuesday informed that the daily growth rate of newer coronavirus cases is declining each day. Till July 12, the Central government has recorded daily the growth rate for newer cases at 3.24 per cent.
While deliberating at a media briefing on COVID-19 status, Rajesh Bhushan, Officer on Special Duty at the union health ministry informed that in a country like India with a massive population, numbers tend to cloud the focus of policymakers as well as people who are managing public health challenges. "Hence, it is essential to know the trend of daily growth rate of cases and we are witnessing that the growth rate of daily fresh cases are declining every day," Bhushan said.
"If we see in the month of March, the daily growth rate of COVID cases was 31.28 percent, in May it was 9.27 percent and further reduced to 4.82 percent in May end and if we see the figures of July 12, the growth rate for newer cases is at 3. 24 percent. There is a progressive decline in the daily growth rate of new cases," said Bhushan.
According to the health ministry as on July 14, the number of active cases in the country stood at 3,11,565, while 5,71,459 patients have recovered from the disease.
Bhushan informed that there are 10 states which have 86 per cent of the total active cases. "Maharastra and Tamil Nadu have 50 percent of the active caseload while Karnataka, Delhi, Andhra Pradesh Uttar Pradesh, Telangana, West Bengal, Gujarat, and Assam have 36 percent of active cases, respectively."
The central government said that recovered cases are surpassing active cases with each passing day. Until May end, active cases were more than recovered cases i.e. from 2 May till 30 May. After that, cured cases have increased and as on date, recovered cases are 1.8 times of active cases.
"The national recovery rate is improving each day. In May, the recovery rate was 26.59 percent and further increased to 47.76 percent and on July 12, the cured rate climbed to 63.02 per cent.
According to the Central government, there are 20 States and Union Territories (UTs) which have a recovery rate percentage more than the national average. Some of these states includes: Madhya Pradesh (73), Haryana (76), Tripura (71), Rajasthan (75), Delhi (80), Chandigarh (72), Chhattisgarh (76), Uttarakhand (79), Ladakh (UT) (87), Himachal Pradesh (76), Assam (64.87), Tamil Nadu (64.66) Uttar Pradesh (64), Odisha (67), Mizoram (64.94), Punjab (68.94), Bihar (69.09), Gujarat (70), Assam (65).
The health ministry informed that testing has increased every day and expansion of laboratory capacity from March 23 till date.
The testing lab network in the country is further strengthened with 1,206 labs in the country; 853 labs in the government sector and 353 private labs. These include Real-Time RT PCR based testing labs: 628, TrueNat based testing labs: 478 and CBNAAT based testing labs.
"Recently, WHO has issued a guidance note on public health criteria to adjust public health and social measures in the context of COVID-19. In this document, WHO underlines the need for comprehensive surveillance and testing of suspect cases and they further elaborated on the meaning of "comprehensive surveillance" by saying that if a country is testing 140 people per day per 10 lakh (one million) population. So, we are taking that indication from the WHO document. In the Indian context, there are 22 states which are doing more than 140 tests per day per million population," said the official, adding there are certain states which require major containment strategy, testing, and clinical management.
The official said that the government is conducting house to house surveillance, upgrading healthcare infrastructure, and urged people to maintain best-practice of social distancing, hand hygiene and wear masks to win the war against Coronavirus pandemic. (ANI)