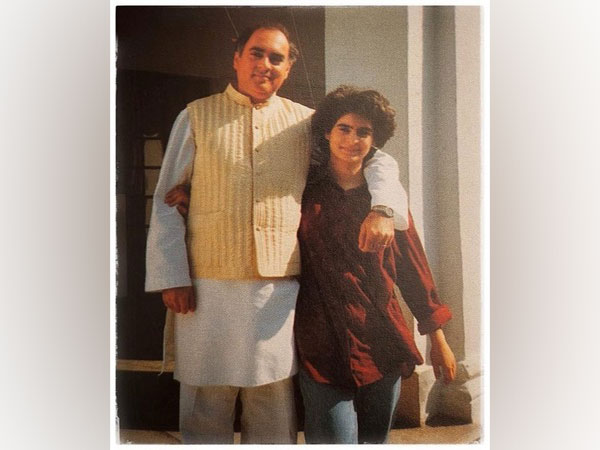 New Delhi [India], May 21 (ANI): Congress leader Priyanka Gandhi Vadra has penned an emotional tribute to her father and former Prime Minister Rajiv Gandhi on his 29th death anniversary on Thursday.
Taking to Twitter, the Congress General Secretary wrote, "To be kind to those who are unkind to you; to know that life is fair, no matter how unfair you imagine it to be; to keep walking, no matter how dark the skies or fearsome the storm."
"To nurture a strong heart, and fill it with love no matter how great it's sorrows; these are the gifts of my father's life," she said in another tweet.
She also shared the last photograph of herself with Rajiv.
Rajiv Gandhi took over the charge of the Congress in 1984 following the assassination of his mother and then Prime Minister Indira Gandhi. He became India's youngest Prime Minister at the age of 40.
Born on August 20 in 1944, Rajiv Gandhi was assassinated by a Liberation Tigers of Tamil Eelam (LTTE) suicide bomber during an election rally in Sriperumbudur in Tamil Nadu on May 21, 1991. (ANI)